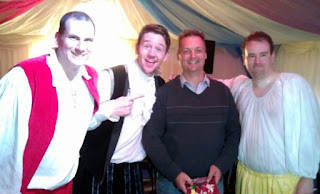 This is yours truly pictured with the cast of the RSC after they ended their world tour of the UK in The Big Top Theatre, Ludlow Festival. I do like a bit of Shakespeare (I'm all over culture me) so having the chance to see from the left Gary Fannin, Ben Stratton and Matthew Pearson perform all 37 of Shakespeare's plays in under two hours was a real treat (except for the theatre seats which were a bigger joke than the acting, Ryan Air offers more arse parking space and leg room)
Having accepted the lack of blood flow caused by seating watching the three "actors" performing The Complete Works of William Shakespeare (abridged) [revised] without the aid of prompts, scenery, and expensive props was hilarious. During the show the audience was transported back to The Globe theatre and relived the excitement of  the opening night of the Bard's scribblings. Provided you accepted that Will rapped Othello, presented the Kings plays as an American football game, Juliet had unfeasibly large breasts and an ill fitting wig and that Shakespeare ended his career after invading Poland and starting WW2.
The Reduced Shakespeare Company (The RSC) (the real RSC stole their name) (they say) also did Hamlet in a record breaking 3 seconds and then played it backwards. I have seen them four times now, they tour extensively. When I met them I told them that I had seen them quite often, they said I was a glutton for punishment but I told them I tried to see them as often as possible as they need the money.  So keep a look out for them and their other shows, The Bible, the complete word of God (abridged) and The Complete History of America (abridged)
Posted by Tony at 22:27