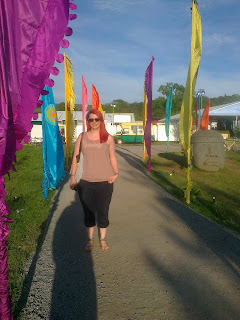 Ok time to 'fess up and spill the beans over where I was stuffing my face like a hamster. The Hay Festival which is just over the hill from Rock HQ and after seeing signs for it for many years and totally ignoring them thinking nothing could be worse than a bunch of nerdy lovies all quaffing free vino while they massage each others egos about how great they are and how fantastic is the lengthy tome they have just put their names too. 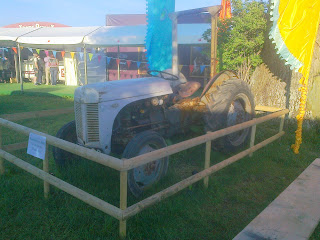 Thankfully our daughter felt I needed some culture and dragged me to the festival where too my immense surprise it wasn't held in the back room of pubs and cafes but in a lovely plush tented city with covered walkways and carpets between pod like accommodation units in which could be found various entertaining speakers. There was even a collection of elderly tractors fenced off so as not to get the lovies linen jackets dirty. 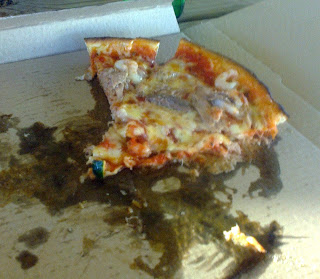 And a fantastic food court where I didn't eat pizzas, venison burgers, sheep's ice cream and the finest mature Cheddars as I am on a diet. 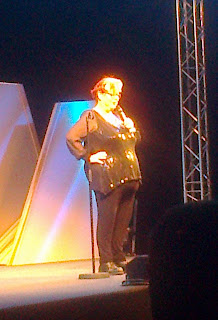 Anyway aside for knackered tractors, unconvincing transvestites (imagine John Prescott in Lara Ashley and blond pony tail wig|) and fine food and drink, there were other entertainments on offer. We saw Jo Brand by way of comedy, claim to fame I work with Jo Brands mother (queue for autographs) and Jo bought me a camera, but that's another tale. As expected Jo Brand was very funny and the packed out audience were kept mightily entertained. 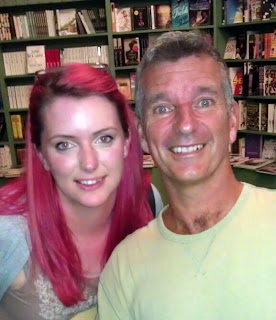 This chap, Tony Hawks (not the skateboarder) was definitely the highlight for Beth (in picture with Tony) and myself. Those who don't know Tony Hawks is not a skateboarder but an author, actor, some time singer having had a hit single in the UK charts as part of Morris Minor and the Blockheads  with a rubbish but entertaining rap song called stutter rap,  and mostly he's comedian who made his name a while back in 1997 (thereabouts) hitchhiking around the whole of Ireland with a fridge for a £100 bet. he wrote a book about this epic trip and has a couple more out, all bet based, where he took on and beat the Moldovan national football team at tennis and had a hit single in Azerbaijan (spelling error surely!) with Norman Wisdom. That's some CV, but most of its a while back, he plies his trade now on radio 4 on panel shows like I'm Sorry I Haven't a Clue and Just a Minute. So yours truly thought it might be entertaining to see him and as the ticket was a present I had nothing to lose.
My supposition that he would spend the evening regurgitating stories from the 97 Ireland trip began to be confirmed as he began his spiel, however what we were actually privy to was a very moving and fascinating insight into his time in Moldova where the population is financially very poor and his efforts to create a centre for children with cerebral palsy all funded from his own pocket and royalties from his books and films.
It really was an eyeopener and I felt humbled listening to his efforts, seeing the photographs of the children and the joy he was bringing to them. This was not an ego trip for a celebrity but an honest account of how he had decided to do something for the greater good. Of course the evening ended with a give us yer money plea and books and DVD's were signed all proceeds going to this project but why not? He posed for photos, signed hundreds of DVD's and no doubt raised a lot of cash towards the new centre he hopes to open.
We left wishing him luck and certain of one thing.
He's genuinely a very nice man.
Posted by Tony at 15:35