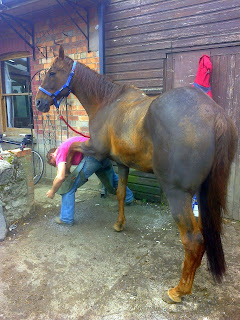 It was that time again where our equines needed some maintenance. I am always surprised at how much attention horses need lavished on them, how much pooh falls out of their bottoms and which bits you have to shampoo regularly to stop them getting poorly. Thankfully the cooler weather has meant the lathering of horses todgers has been reduced to an almost acceptable minimum (how do they cope in the wild) and the need to don gloves and put up with horsey leering at you as you clean the dirt off his bits only happens when absolutely necessary.
What was absolutely necessary was that Chester needed a good shoeing, this is not giving him a good kicking but nailing slabs of metal to the soles of his feet so he can give you one. This was because he had grown out of the ones he was wearing (worse than kids!) and because the pillock (technical term for a dozy horse) had over reached himself trying to grab a gobful of greenery the wrong side of a wire fence and in so doing ripped a shoe off. Not Steve the Farrier plus apprentice made a fab job of putting this right and making a new set once again and put up with me watching and commenting on every hammer blow and hoof file on the proviso I didn't get in the way, touch anything, upset the horse, and that I fed them all sausage sandwiches ( I suspect the sausage sandwich ordered for Chester was a ruse). I fulfilled my side of the bargain and in return was witness to the amazing skill of taking a slab of metal and making it into a shoe that fitted our boys plates of meat perfectly. Chester enjoys this Farrier/Horse interaction and demonstrated an incredible sense of balance by standing on two legs (thankfully his own not the Farrier's and the two were front right and rear left otherwise he might have squished Not Steve the Farrier) Hes is good shape (Chester not Not Steve) and once he loses the last of his winter coat he will shine. Provided yours truly has time to lavish on him with a brush.
Posted by Tony at 12:51

You still don't seem to have grasped this man / horse interaction. In a similar way to sailing, the definition of which is going nowhere, very slowly and at great expense, it seems to me that equine ownership also results in the expenditure of enormous amounts of the folding stuff, along with worry and effort, for little in return?
Very sorry to hear of the demise of your birds to the fox. Having suffered in a similar fashion and more than once over the years, I share your frustration, not just on the loss of the birds, but mainly for the sheer wanton waste. It would not be so bad if the fox took one bird but their apparent need to kill everything in sight is awful.
Mind you, on past experience, I'm sure that you will now spend even more money on the Fort Knox of the bird world to house even more exotic feathered finery!! Good luck.