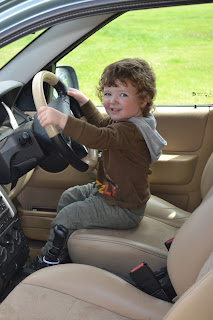 While yours truly was busy going nowhere on an exercise bike this morning his beautiful and oh so patient wife got things ready for a quick trip to the beach. The division of labour was thus as yours truly is about to set out on a mega man test, although not the full monty that was planned (due to MBAOSPW being very pregnant, 2nd rider having failed to recover from knee surgery fully and only one support driver available for the P2P main event) which is now only a few weeks away (modified P2P not birth, that's 24/9/13 whereas man test is 8/8/13) so all training opportunities must be taken, and having MBAOSPW take on the task of preparing everything for the beach party prevented the "where is the... did you pack the...." conversations as everything necessary will be packed on account of her ruthless efficiency whereas I tend to get there and think would it be a good idea if we had such and such. That was how we came to be at the seaside by lunchtime with Miranda packed to the gunwales with everything but the kitchen sink. 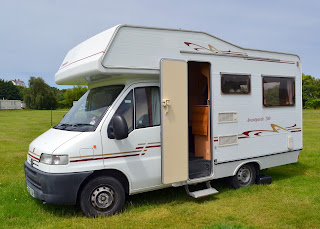 MBAOSPW's mother, supergrandma was even more prepared and was already there with one of these! 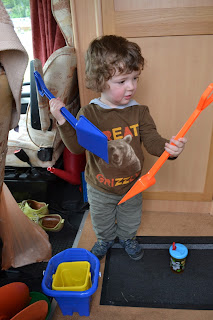 Which really did have everything including the kitchen sink and a choice of beach necessities. 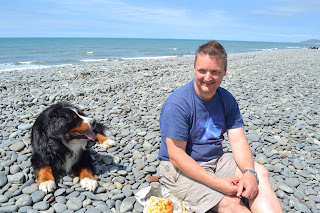 Once weapons of choice were stowed away I took a few minutes off diet to sample fish and chips, well some of them, the big dog behind me had more than I did. 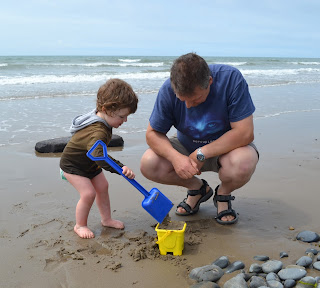 And so we got on with the task in hand, construction of sandcastles, little t was keen to show his skill set 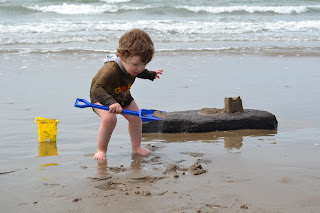 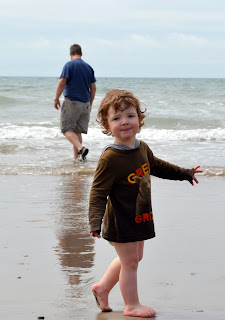 so I left him to it and cooled off 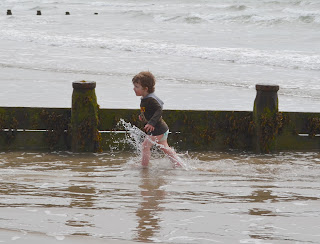 while he did some amphibious assault training.
Posted by Tony at 22:22