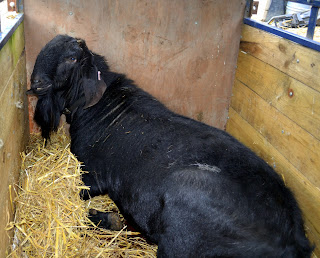 Boris, an Anglo Nubian Billy goat has landed at Rock HQ and straight away has made a real impression on everyone and everything here. He is an incredible animal, a champion champion, the all Wales Champion and so on, so many accolades, so many trophies, its such a shame that no one can bear to get near him without full NBC gear. 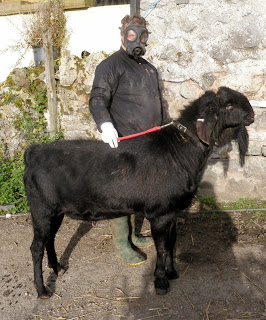 Now I had read, and been told that Billy goats smell, so I thought I was ready and assumed that as they pee on their own heads that the smell would be pee like, ammonia based, in other words like the worst ever toilet smell. It is shockingly bad. 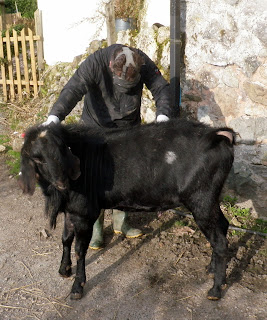 The above picture demonstrates his was of showing he likes you, he has just peed up my legs and wellingtons. Anyway the smell is indescribably bad, so bad it actually makes me want to cry. Its impossible to describe other than its like nothing you can imagine, train loads of fermenting skunks would be more bearable than the secretions from Boris' glands on his head. Worse still, if you get it on you it sticks, its bores into your clothing and remains. Forever. 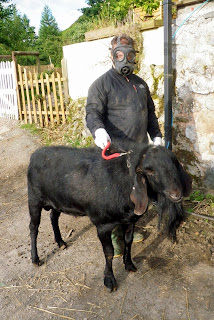 Skin to smell contact means you are tainted for days unless you can get to cold water quickly, hose yourself down, rub coffee granules into the affected area shouting the incantation "Oh my God get it off me  get it off me!" before it takes hold. Gloves and clothing that can be pressure washed are essential as the mighty Boris is very friendly and apart from peeing on you he loves to rub himself against you, or trying to lift you up in a playful manner. For me the gas mask is the only way I can spend anytime at all with him, the smell is literally eye watering and I have no idea how I will get it out of the trailer other than by burning it. Oh, have I mentioned he is red hot to touch, like a furnace fuelled by testosterone his body heat helps radiate his aroma to the ladies housed close by. 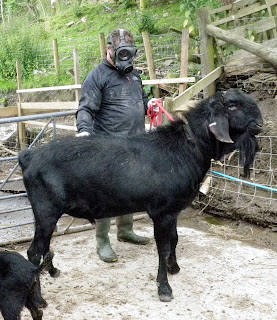 He is also the size of a small donkey, in fact we have a horse smaller than this goat, so thankfully he is a docile chap (providing he gets his own way) doesn't jump fences and gates and likes a quiet life. Unlike Anglo Nubian females who constantly mew that the sky is falling in, Boris is the strong (smelling) silent type. He is here on loan by the champion goat breeder who wants a kid from him and our lady goat Idonea, otherwise known as Kayleigh, who is we discover the mother of several champion goats already.

Oh my goodness, that is one large goat! A shame that he is stinky! He is handsome. :-)

I have heard they are stinky too, but not gas mask stink before. How does his owner handle the smell ?
Hope they have some nice kids together.
Kit

Wow, how handsome. I had a boyfriend that looked gorgeous but his BO was eye watering....got rid of him! Hope Boris behaves and does what he's supposed to ;)

Yeah, yeah, yeah!! Some people will find any excuse to dress up in rubber, I've heard the stories .....

I begin to see a trend developing here, rubber today, latex shorts on the bike tomorrow!!

You have reminded me what goat smell is like - I had friends in Norfolk who kept a full nutted Billy goat and I always reckoned you could find you way back to their place from the pub in the dark with no problems if it was downwind.

Let me know when it is safe to visit!