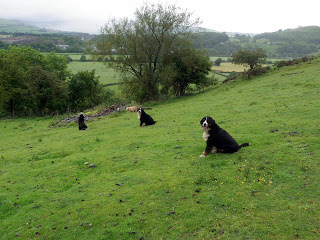 It was perhaps fitting that Pippin our collie cross was buried in torrential rain. The Clan sat around while yours truly dug the second hole in 24 hours to bury a much loved pet. It was a lifetime ago that I rescued Pip, so small she could sit in the palm of my hand, so flea infested she was aneamic and on the point of death, from a bedroom of a council house where she was shut in with 7 other dogs. Another bedroom had three naked starving children but thats a different tale, and I didnt bring any of them home, they went elsewhere. Pip survived not having a mum and became a very hyperactive superfast collie who was befriended by the beagles and became a permanent feature in our lives. She came second at puppy training class, and once you forgave her strange facination with eating other animals doings she was a lovely dog. 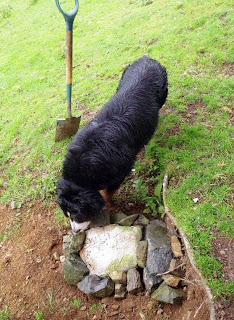 So on the slopes of the Bonsai Mountain in the shade of a hawthorn Pippin was laid to rest with the Dolyhir Clan ignoring the rain to say goodbye. 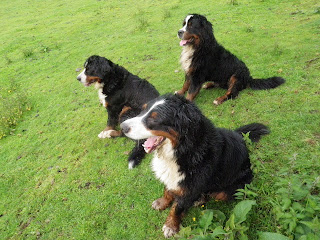 Across the valley they could see Montana. 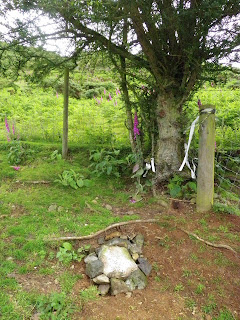 Pippin was covered in rocks from the old cottage to stop any inquisitive wild animal. And just when it couldnt be more wet and miserable this happened. 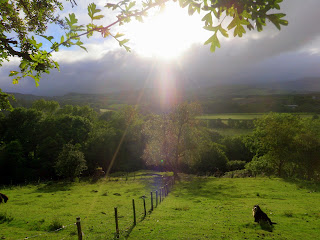 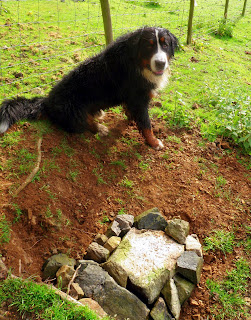 So So Sorry to hear the news and both so close together, its never easy to say goodbye to a much loved pet, even when you know the time is coming. I'm sure they will be running together across the Bonsai Mountain every day. Enjoy the wonderful memories.
L
Monkey Business and Quilts.

to loose two friends is very hard, our hearts to you and the clan. what a wonderful life you gave to Pip whose story could have been so different- you are good souls!!!!

We are so very sorry to hear of the heartbreaking losses your family has endured recently. Berner Tails sent us and we are new followers. What a beautiful spot to lay a loved one to rest. ((hugs)) http://raisingrama.blogspot.com/

I am so sorry to hear of the death of Aunt Montanta and Pip. They were both good dogs and while both were excepted one from cancer and the other from old age. I know it is hard to let go of any such good friend, I know both will come back to you in their next lives.
Kit