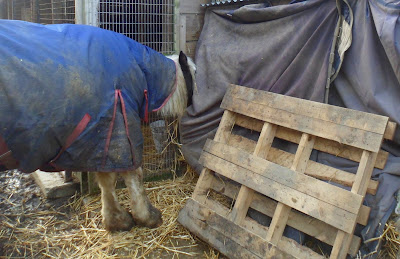 Blessed with so many critters so close to the cottage I am, unlike James Herriot, usually thankful that all creatures great and small cannot talk and for the most part share my love of heavy metal/prog rock (Yes goats do milk better listening to Marillion (( Fugazi the album of choice((( neo-prog rock ok pedants)))
There are also occasions when I sincerely wish they could tell me what has gone through their tiny minds, usually when they have done something incredibly dull like getting their head stuck in a piece of garden furniture.
Today I had a real sense of Apollo wanting to tell me something, he having the greater part of his face stuck exactly where he knew it should not be, in the straw store. Old horse blankets nailed over the front reinforced by wooden pallet proved no deterrent to this determined pony. Was he hungry? Forced to eat his future bedding due to lack of appropriate calories. Well as two ton of hayledge is just out of shot awaiting his machinations then no. No. He had something on his mind.
Forced out of the way so I could get a look in at first glance it looked like there was nothing to see, except bales, admittedly part chewed bales, but bales. Closer inspection, at Apollo's insistence revealed a cosy Ryeland lamb squeezed in the almost non existent gap and on discovery Bella made no attempt to leave her den. In fact she curled further into the straw and made it obvious there was no intention to move out. I will put a pic of this on the blog tomorrow once she has turned round a bit as all we can see at the moment is a fleecy backside(photographing and publishing pictures of lambs backsides gets you an undeserved reputation in these parts) oh and pony that grasses on its mates.
Posted by Tony at 22:25