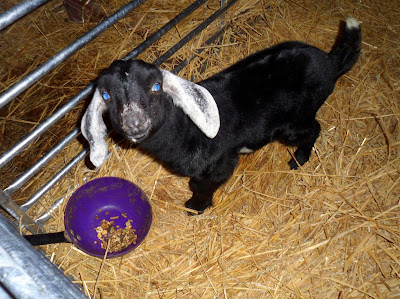 Kid Kurry is a lovely boy and even though it takes three times as long to feed him as it does to milk his mother its time well spent, having said that I wont be sorry when he is on solids.

Not that I begrudge him the three pints a day he's guzzling.

There was one of those only here moments yesterday, yours truly putting a freshly milked pint in his feed bottle got distracted and whatever the distraction was (take your pic, charging pigs, rampaging Ryelands, Shitlands, Bernese, and many more) caused me to put the full bottle of milk on Vic the Volvo's roof. Much much later when I had spent some time looking for said bottle while trying to convince myself that if I hadnt taken it off the roof then surley someone else would have. Eventually I gave up hope and found myself confessing to beautiful and oh so patient wife that I may have let her drive to the shop to buy emergency food supply for humans as Rayburn has died (again, but its a mercy killing, all will be revealed, pity its a Rayburn as it could have been an Aga Saga) with goats food supply balanced on top.

On hearing this the patient one did remember a strange sound like something rolling off the roof at around the two mile marker, I could if I wished go and look for it as she could remember exactly where it was but she thought best not stop as no idiot would have let his wife drive off with anything perched on the roof of his car, especially as he had watched her turn round in the yard and waved her off.

As the idiot she was talking to was the same one who drove from Rock HQ all the way to RAF Brize Norton (140 miles or so) with a set of sheer shears on the roof of Rene and only rescued expensive sheep shears when friendly lorry driver at traffic lights shouted that "You got summat on yer roof mate!" then she was sadly mistaken in this assumption and Kid Kurry was doomed to starvation until the milk bottle shop opened.

Thankfully the apprentice smallholder donated one of his bottles and all will be well, provided I don't get his and the goats feed and/or bottles mixed up. As if.

I have a feeling Kurry might replace Ambrose as the pet wether. I thinks that is how Ambrose origninally started out :)
Kit
PS Rememeber though he will get bigger than Ambrose once he is full grown.