A new sense of direction! 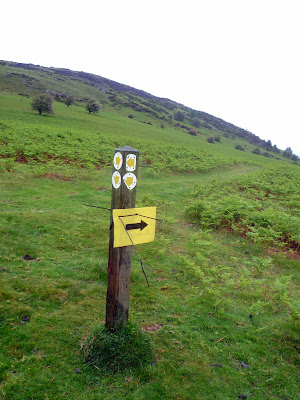 One of the great things about living at Rock HQ is having a backyard of over 500 acres, which includes the Bonsai Mountain and a big chunk of Offas Dyke. In between the demands of critters, jobs list, childcare and paid work I can escape with the Magnificent Seven and while I wander I can gather my thoughts. Today's theme was juggling. I was, I pondered, like a circus juggler, working hard to keep his balls in the air (loads of opportunity here for smut but it will be avoided, this is a serious philosophical piece, believe that and you'll believe anything) Things are getting a bit manic. Court work, assessments, Red Kite Fostering (no not the bird of prey, see margin) smallholding and family life were all going by a bit quick, what was needed was less balls, as it were. And straight from the signs and portents shop a new sign appeared at Fiveways Crossing. There was I seeking a new sense of direction, and here it was. I decided against removing said sign just in case it was not meant just for me. So decision made, less balls. Red Kite Fostering has got very busy very quickly so needs more of my time, family and smallholding are non negotiable balls, that leaves Court work and assessments as a ball that can be put down carefully and picked up later if need arises. I had planned to be full time at Red Kite on day, but its happened a lot sooner than I could have hoped for. 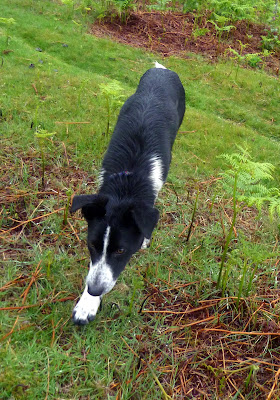 In the same vein, success stories, Socks here is doing everso well. He is a very fast learner, walks to heel, never runs off and is a very happy canine. He might not be quite so happy 27 June when his little packet is going to be removed by the Vet, but hopefully he will forgive us and soprano might suit him anyway. 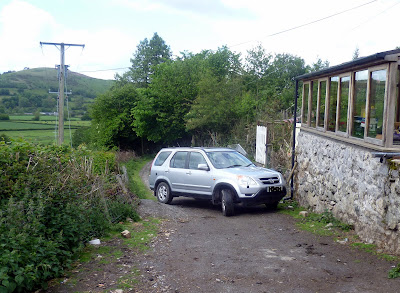 No this isn't how I normally park Hazel, but late this afternoon two miscreants on quad bike and trials bike appeared at the entrance to our piece of the planet. Having had a lamb killed by them or those like them last Sunday I wasn't going to let this (or them) pass. As they did a quicker u turn than a liberal councillor asked about the deputy prime minister I plonked Hazel thus so they would not be able to get by without me getting their picture for the local boys in blue.

We're at a similar 'crossroads' having started the Very Smallholding and wondering where we're going to find the time to make this very important part of our life work, and hopefully, pay, at some point in the none too distant future. I'm looking for what I can drop, gently, without breaking something. Unfortunately it seems it'll get worse before it gets better so I'm just going to have to be better organised.