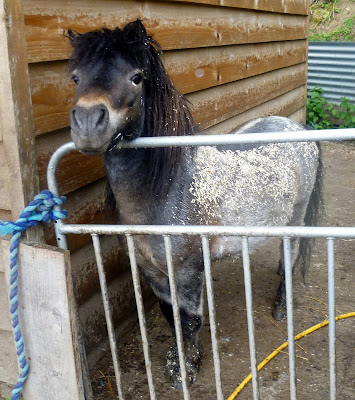 As predicted life at Rock HQ has been slow time today. Once the descent of the stairs was mastered the legs creaked back into life but forbade any real exercise. Horses were mucked out and wheelbarrows of muck were dutifully wheeled to the compost corner. An attempt to empty Trixie of pig feed was thwarted by the combined attention of the Ryelands and marauding goats who circled like sharks and exploited the fact that I couldn't be in two places at once. As I collected full buckets they were in the feed store eating the recently deposited bucketfuls, when I emptied buckets in the feed store they were in the trailer stuffing themselves. I gave in before a real sense of humour failure occurred. 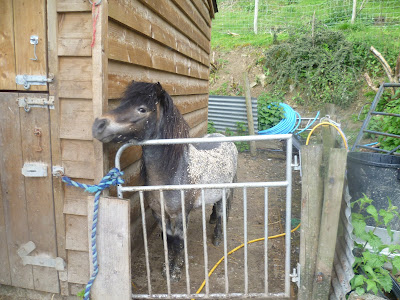 Trevor, AKA The Pocket Rocket and more recently Johnny Big Potatoes has been put in solitary on account of coming over all stallion. Never been one for the shy and retiring way of life the little monster has developed a real bout of small horse syndrome and has made life misery for the equines and bovine that share his universe. He was the root cause of Hetty jumping fences as he tried to make an interesting sub species, a Corse or a How. Hetty grew tired of his attention and took to the air. 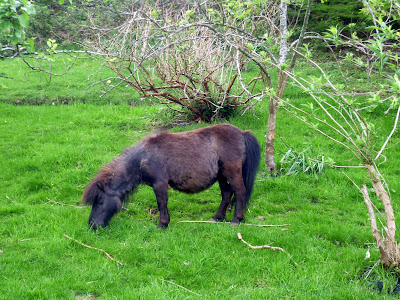 Yesterday he chased Apollo and William round the Corral OK until the cowered in the corner. Enough was enough and so the little temper tantrum on hooves was persuaded to stop bothering his compatriots and walked into solitary to calm down. As I type he is telling all and sundry how unfair this is. We are pretty certain that he has done the deed with Misty and that this fat little pony is going to have foal very soon. 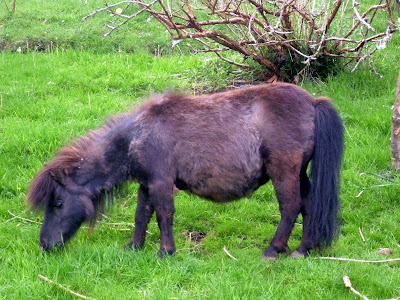 If Trevor keeps this up will be eventually be gelded, or do you want a few more offspring out of him ?
Kit