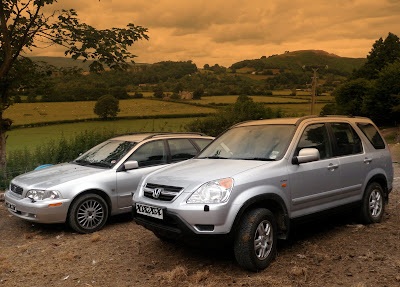 In the summer we changed cars, out when our old dear friend Rene, replaced by Hazel Honda, a four by four wanna be that seems to get through the worst of the snow, and Fifi was changed for Vic, an uber solid Volvo estate that has, so far survived a rear end shunt and the attentions of a reckless pony who got a smacked bottom for attempting suicide by Volvo. The best thing about these two is that they run on LPG. As there are dozens of LPG suppliers around, and if should they need to they run equally as well on petrol, they have two tanks, one gas one petrol, it seemed a no brainer. So for the last six months we have enjoyed half price motoring (and as most petrol round here is now over £1.33 a litre its a good job we did swithc to gas) , we get cheaper road tax as we are now classed as green warriors and the government like to reward us for our virtue so all is well.
Not quite.
Vic seems to have gone off the idea of gas and has refused for the last six weeks to switch over from petrol to gas, even going so far as to tell me he had no gas when I knew full well he had a tank full. Hazel has been used more due to the snow but the last 1000 miles have had to be petrol as no gas deliveries have been sent to our area. The last two garages I called at I managed to get 4p and 17p and when I chanced the third just told me to go away with a nice LCD digital display on the pump. This was after I had broken the cap off the filling point because it pretended to be stuck fast. The application of brute force persuaded it to unstick but in three pieces across the forecourt.
Vic has been booked in for surgery at a clinic that specialises in gas Volvo's next week but in a strange twist, he started running on gas just as I got home today, a case of Volvo heal thyself. I'm not convinced it will be a long term fix so whether he likes it or not he's going to be done.