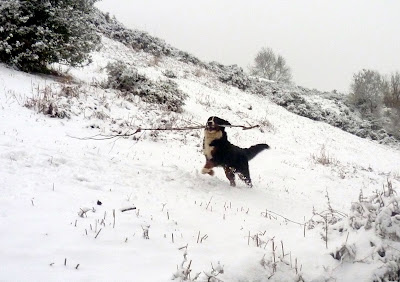 One thing you establish very quickly when setting out on a venture like smallholding is that if you want the day off you have to work twice as hard. So today we wanted to go and see my parents who live up north, to do this we had to do the days smallholding tasks before we went, and then do the evening rounds when we got back. This gave us a twelve hour window to drive 350 miles, it would have been less but we have a sat nav with a sense of humor, do some shopping for Peanut (our as yet unborn offspring is called Peanut) and have lunch, open Christmas prezzies with my parents, sister and brother in law, catch up on whats going on, come back, calling in on Tracey's mum for a cuppa, home in time for supper and do the usual rounds with the usual suspects.
To be able to enjoy this long awaited day off my day started with wrestling a 25kg sack of coal up the bonsai mountain to the lair of the technohermit. Now Mad Keith has been in the habit of phoning us at 7am, usually with a request of resupply, we have learned to interpret what he means, "I got no bread" means "Have you a spare loaf", alternatively "Are you going anywhere?" translates to "Can you get me some shopping" and "When can you get me some coal" means "Brass monkeys have moved in, please help" So as yesterday's alarm call coincided with the telephone call requesting resupply of fossil fuels. I got him a sack when I was at work, but the snow meant Hazel was not going to get up to him. I left it at the bottom of the track hoping he would be tempted to use his newly acquired sledge to haul it up to his cave but first light this morning while walking the Berners I saw the sack where I left it. I pondered whether or not to leave it, long enough for Rocky to pee over it, helpful, cheers, decision made, I would take it up to him. Curiously, once I managed to get it to his lodgings, narrowly avoiding giving myself a double hernia from the effort, he was not out and about enjoying the cold morning air, but snoring. Loudly. I was tempted to drop the coal and leave him to it, but some payback was required for all the morning calls, and most importantly, I couldn't afford him to think that the "Coal Fairies" had been in the night and then me be out of pocket. A loud "Good morning Mad" (we are on first name terms) roused sleeping beauty. Once I established for the confused veteran of the hill that I was meaning him no harm and merely dropping off his coal he put the machete away and muttered something about it being too early for deliveries. I made good my escape and vowed never to surprise an armed sleeping maniac with loud noises ever again.
And so another day is over at Rock HQ, a very long but exciting one. I say over, nearly, the boys need rounding up and putting in their stables and the boy Berners need a bit of supper and light exercise. Exciting because we are now almost prepared for Peanut's arrival, he/she will have somewhere to sleep now at least, and we saw lots of our family, and then to top it, in the post there was a letter. A hand we did not recognise. Enclosed were several photos of Rock HQ from the 1970's, the cottage has changed beyond all recognition. So a big thank you to the sender. The pics will be posted tomorrow. Meanwhile above is one of Spotty being mental with a stick. For a change.