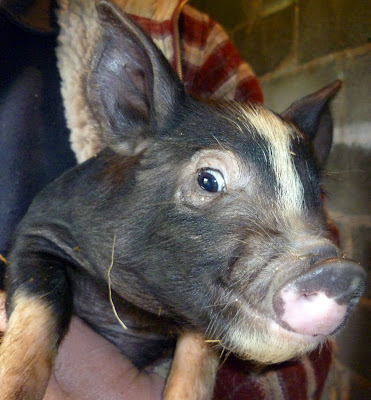 I was going to write about how my interfering with the water supply once again caused a slight problem as Steve the ever so patient electrician called while we were out and found the reservoir wasn't full. Thinking that I would have followed his strict instructions of "Don't touch" to the letter, he carefully checked his work, checked the switches, fuses, and finding the pump working but no water coming out he disconnected the power supply, waited patiently in the cold damp foggy air perched on a muddy slope and when he judged a suitable time had passed he "energised" the pump again and to his relief water then came out, but in a location some thirty metres from where he was expecting it as yours truly had diverted the supply, temporarily, and then compounded the crime by leaving everyone to guess what I had done. Problem solved, again, he left a note on the door in capitols, "PUMPS FIXED DO NOT TOUCH!" I think he is trying to tell me something. 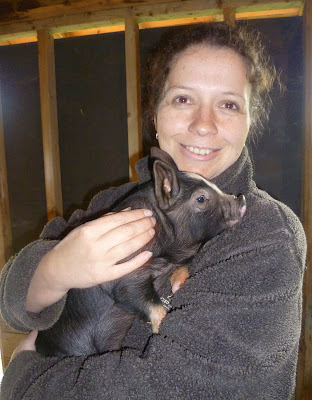 No, I'm not going to write about that as I am going to have a rant about T Cup Pigs or Micro Pigs, two pictured here, honest guv, yours for only £650 quid, make a real nice pet, so cute, every ones getting one, get one, or two while you can. The prompt for this rant is yet again the TV, which is sometimes on and often shouted at (I'm of that age now, I shout at the TV, sometimes the radio, and can be found muttering when reading a newspaper article) and the presenter of a prime time chat show has just had pig shoved in his jacket telling the audience what a good idea it is to have a mini pig. Now the audience ooooed and aaahed, and the little pig did what piglets worldwide do, looked cute, and no doubt the gullible will no trot off, search the internet and buy a micro pig, T cup pig or mini pig for extortionate prices and all will be well in their world.
But it wont be, because there is no such thing, its a con.
The micro pig is so small as its a baby, a few days, weeks old. It might be a small breed but its still a baby pig and will, in less than 12 months, be a huge big adult pig, perhaps weighing a 500 kg and depending on how its feeling, that's a lot of angry pork stood in the hallway trying to get out of your front door to terrorise the neighbours West Highland White Terrier. It will dig, chew, pooh, sweat, push things over, run through things, like doors, patio windows, sit in ponds and generally do exactly as it wants, as its a pig, and that's what they do. A tale we heard a while back was of two boars who did not want to go in a trailer so put their snouts under the 4by4 waiting to tow it and tipped the vehicle over. And if you have a pig, you need more than a pig, you need two, as they get lonely, and if you have a boar they slobber and dribble when they come over all Barry White and get in the mood for luuuurve. You also need to be registered to keep the pig, and don't even get me started on what you are allowed/not allowed to feed them, any of you out there with your half grown piggie in the kitchen waiting to be hand fed choice items from the fridge will face a £2000 fine and prison if caught.
So, as only sensible people read these pages you will know that the "micro pig" above is a piglet, a few days old, which we hope will join us if here at Rock HQ as Morgana2, to be our breeding sow, alongside Guinevere. You will also be well aware that the cute bundle in my beautiful and oh so patient wife's arms will grow, quite quickly, to be the size of its mum, pictured below. T Cup Pig? You might be lucky and get half of its left rear trotter in a large T Cup. 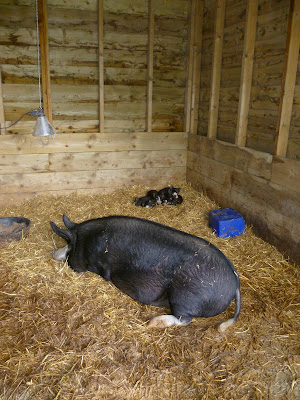