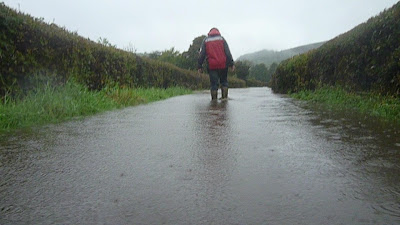 Life's strange sometimes, funny strange, funny in that we have had a million trillion gallons of water fall from the sky, flooding the stable, the horse corral and carving interesting gully's in the drive. Strange in that the reservoir was empty. Now many times I have explained on these pages the arcane system that supplies the cottage with water, the complex system of valves, pipes and taps and the fact that here, at certain times, water will run uphill. I checked the pipework, all by torchlight as these slight bothers are no fun unless they happen in the dark, preferably when its raining. We were connected. I checked the electric supply, all on and looked like it should work. I wiggled a few wires in the hope that the pump would suddenly spring to life, but nothing happened, not even the mildest of shocks. The last resort of kicking it could not be carried out effectively as the pump and switch gear below ground level and are protected by a concrete shaft. I was also sliding down the muddy bank in the darkness so any attempt at physical violence against inanimate objects might backfire, so I resorted to pointing at it and swearing. I listened. No. No sound of pump guiltily reactivating, no sudden gushing of water. Cursing my misfortune and inability to remedy the situation I phoned Steve the electrician who listened patiently to my rambling explanation. He would saddle up his pony and head over to our ranch and fix it first light. Excellent.

First thing he arrived, the last of the water was boiled for a tea. With his monster utility belt he set about the recalcitrant pumps wiring, casting a few spells and chanting under his breath he overwhelmed the competing energies of water and electricity without being fried to a soggy crisp and after "energising" the pump, got the water flowing again. Hurrah. We are all saved and he could have a second cuppa. His work done he left us to go and do some daring deeds elsewhere.

I googled energised. Its a term used by electricians. It means "I switched it on". It takes an expert sometimes. 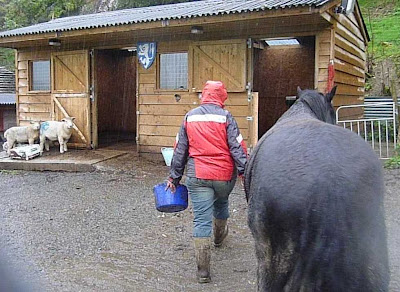