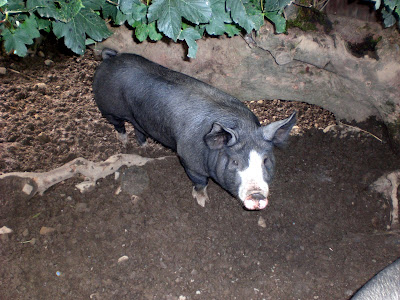 We are under siege from foxes. Poultry that survive being sat on by goats run the gauntlet of predation by the fox. To combat this menace we have tried various methods, none successful. There is a story that goes around that the increasingly desperate poultry owner finally succumbs to, that of, its a known fact, Guinea Fowl are good guard birds against foxes. They are so vigilant they keep watch while the other birds do the important things like sunbathing, first sign of the fox they scream, form a circle and run back to the hen house, thus saving the hens. I have always dismissed this as nonsense, as equal a nonsense as buy a Llama, they keep foxes away in South America, they can do the same here. Yeah right.

However, losing 80 odd birds in 12 months and several potent ail Christmas dinners does funny things to you. So when Steve (yes another one) offered to give us two Guinea Fowl I was nearly convinced. As they were free I was persuaded to take them. Phone in two weeks and they will be ready.

You said phone up remember?

Ha! Don't tell me the fox got them, hahaha

Yes. The fox got them all.


Back to the drawing board.