Adventures of a TV repairman 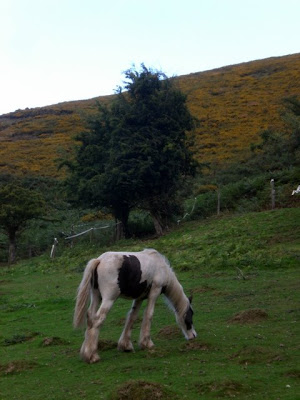 Amidst the chaos of our evening rounds a lone cyclist appeared on the track tonight. This proved a useful distraction for the dogs whilst I made the pigs a new bed. I gave them two bales of fresh straw tonight to make up for the fact that I left a tap on at 6pm yesterday evening and remembered the fact by 10pm, in the meantime the pigs vacated their barn as 500 gallons of cold water had run into their bed.

Once the barking had settled to a level where human ears wouldn't bleed I greeted the cyclist. The Technohermit had ventured our side of the hill to ask a favour. No problem Techno, how can I help (we are on first name terms now)

He opened his dirt encrusted hand to reveal a small black object in his palm. "It's me TV knob, its bust."

Thankful that the Technohermit hadn't really hurt himself I heard myself agreeing to get his TV to the shop for him. He stood for a while.

"Hmmmm" I nodded still examining his knob wondering what mischief he could get into if I gave him some really strong glue.

"Only if youre having one!" he shouted over his shoulder as he made his way to the front door with a remarkable turn of speed caused by the lure of the plasma screen TV. "Just a quick one like." Which lasted just as long as Emmerdale did. Uncanny really.