The block work got done today. As ever any job here at Rock HQ is fraught with difficulties, sometimes a simple life has its appeal but we are in the words of Shackleton "Getting there". The job has got bigger though, after a chat with the Stable Sprite and our Rugby playing builder, Pritch, its been decided that the inside of the stone wall at the back has to come down and a nice new block wall will replace it. This has added at least a days hard labour for yours truly. 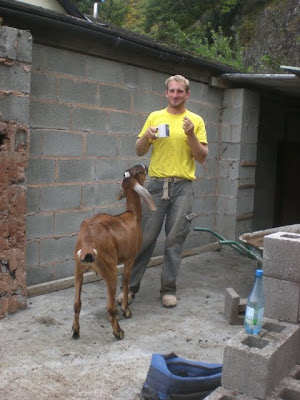 The distractions were many, goats who wanted tea and biscuits, then fell asleep in a sunbeam, head in bucket. I left Pritch to it while I fed the pigs and found only four in the sty, not the expected five. Once Bronwyn heard me calling the bushes and bracken on the common started rustling King Kong style and finally a very disgruntled pig appeared at the fence before gracefully rolling under the fence commando style to join the others at the newly excavated trough. The ubiquitous corrugated sheet was put into the breach and bolstered by two tyres filled with rocks. Its holding the pork horde back so don't knock it! Other distractions, well cheerful hikers who wanted to chat while I wanted to stop carrying 9 inch concrete blocks across the yard. Add to the mix curious chickens, mental dogs, insane bigger dogs and rampaging Ryelands, one of whom, Joan, appeared in the yard in some distress where we discovered that she had a very nasty attack of maggots which were dealt with by sharp scissors and a bucket of Jeyes fluid, its a wonder any work got done at all. In fact lots got done besides. The preparation for the tree felling entails moving the water tanks so I manfully wrestled two 250 gallon tanks from their perch and into the lane. The water collected from the stream supplies the animals and the garden, a temporary supply bypassing the tanks has been set up until the trees are cleared away, so by 2015 the tanks should be back in place. 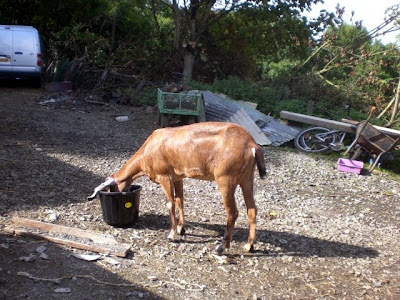 The final distraction came when I fed the pigs late afternoon. Now I had spotted a Jack Russell in the lane but thought that it belonged to a walker. As I climbed into the pig pen to do my usual Riverdance routine with the future bacon one of the pigs spoke. At least that's what I thought happened for a split second until sanity prevailed and as I hopped around the pen avoiding the slavering jaws I realised the pigs and I were not alone. "I cant see your pigs!" the voice continued. I traced the source, a new age hippy type was trying to get into the barn. Luckily my skilled knot on the baler twine was preventing a dreadful encounter between her and the hungry flesh eating porkers. This was new to the pigs so they curtailed their assault, in fact Bronwyn pushed through my legs to get a better view.
"Have you got any sausages for sale?" The weird hippy type enquired as Bronwyn and I charged across the pen in a pork cavalry charge. I dismounted as gracefully as Bronwyn would allow "No!" I yelled as I climbed over to greet the stranger (and they don't come much stranger, not since the Orthodox Jews saga) "Oh its alright mate I'm vegetarian anyway"
She held out her hand to shake, I shook and looked at her other hand, the one containing the rapidly emptying can of export strength premium lager. She staggered backwards, "I just wanted to see your pigs, I love pigs, seriously I do" she steadied herself and belched. Totally taken by surprise I stood opening and closing my mouth like a stranded guppy trying to think what to say to a half cut hippy pig botherer. Reinforcements arrived in the shape of Tracey who was relieved to find I wasn't talking to the pigs and would now believe me when I told her what had slowed me down. The mad hippy rambled on about life, the universe and everything, I'm an archaeologist me, I love pigs, its not the drink talking, do you wanna make something of it or what, the Jack Russell holding her back, growling, leave it he's not worth it, until running out of lager she staggered off down the lane vowing to return one day with a metal detector because from her house she could see we lived in a Saxon field. Her Jack Russell dutifully followed looking most apologetic for its owners antics. There was a sudden squeal of delight to rival noise of the pigs, "Look what I found!" The hippy was dancing in the lane. A Viking hoarde? A Saxon Burial site? No. Even better. From inside her jacket she raised triumphantly to the sky another can of lager.