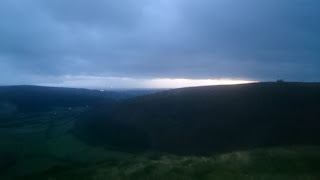 Quite often yours truly can be found in the company with anything from 3 to 13 dogs as we patrol our domain in the early hours. We follow a well worn path around the Bonsai Mountain, perhaps to the summit, or across to the ridge opposite, rarely, if ever meeting anyone. What we do encounter, often, are sheep with the collective IQ of a dead slug. 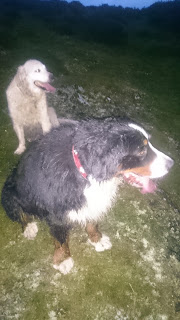 Now our dogs are well trained (ahem) but bear in mind its before breakfast and to their inner wolf they are on a hunt. So it is entirely unhelpful to have sheep, who should know better, loitering on our well trodden path, trying to entice the clan into a game of chase. 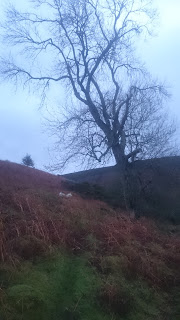 Thankfully this stupidity on the sheep's part fails to work but the dozy creatures do nothing to remove themselves from the breakfast menu, instead they do the following. On seeing yours truly at the head of a large mass of predators they stand and gawp in wooly amazement like they have never seen anything like this before, despite the very same thing happening 24 hours ago. They then stand up, if lay down, and look at each other as we get closer and closer until finally at a point where a fat bloke would have a good chance of catching one without having to break out in a sweat running after them, they turn and run. Not run away and hide run, no, they run ahead of the wolf pack who are now watching with some interest, no doubt wondering when the fat bloke is going to give the unleash hell order. They will even run  down the hill and onto our path just to make it easier for us to chase them. Which we don't. Once the the wooly cretins have finally got out of sight, around a bend or through some flora, do they make good their escape? Of course not. Instead they stand and wait until we hove into view again where they give their best come hither looks (many a farmer has no doubt got into trouble from this look) waiting until they are close enough to taste when they repeat the whole  process. 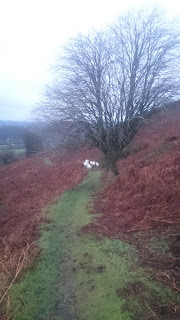 Today's group of wooly braindeads were even more stupid than the norm. One stood her ground and refused to give way while we passed. No an issue, she was on the high ground and we passed peacefully below, all her friends on the other hoof ran down the hill and bumbled along in front of the pack in mock terror waiting to find a hiding place so they could do it all again. She then followed behind yours truly and the pack bleating and generally drawing attention to herself until the anxiety of being a food item safely behind a large group of hungry life forms became too much and she charged through the middle of us to join her friends waiting a short lunge ahead. The good nature of the Dolyhir clan allowed such foolishness to pass unpunished but it does raise the question about Darwin and his theory of natural selection in that does this apply to sheep given their immense capacity for self harm. 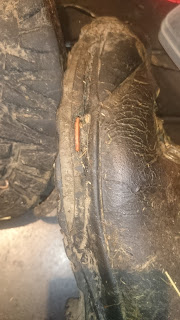 Meanwhile, new boots are required. Soggy feet meant a close inspection, the sole has split form the boot and the other is in a similar state with a nail through the bottom of it.
Posted by Tony at 10:50