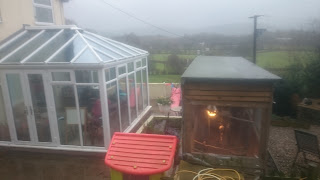 On a weekend of gales and torrential non stop rain it was clearly the weekend to be outside to tackle the biggest jobs list this smallholding has ever see. Naturally all were animal related save for a few exceptions but they invariably involved animals in one form or another. So in the teeth of the storm yours truly set about re roofing the aviary as the old one took leave of its permanent residence in the last gale. This task was accomplished quickly with the minimum of fuss and the reason why the rain gauge, recently upgraded from a mug on the wall to an all singing all dancing weather station that transmits useful info to a base unit like, its raining, anyway the reason why the rainfall measure was so out of sync with the real world, ie Biblical downpours registering 1mm whereas the trusty mug showed 2 inches, was because the peacocks used it as a drinking bowl. 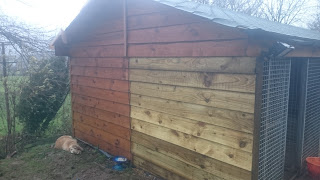 Once the roof was where it should be I set about the roof of the donkey shelter, a job waiting to be done in a gale. This did not go to plan as once the first 2.5 metres was in place the wind took it across the garden, broke it into four pieces and laughed as I tried to retrieve it. Giving that up as a bad job and not wanting to waste more materials fighting the weather I moved on to a modification on the Swiss Style Kennel Block and put a new wooden wall on the end to offer more weather protection. This a necessary task as our Berners do not go indoors when its raining and sit out getting wet meaning a dozen plus one soggy doggies ready to wreak havoc in the cottage which defeats the object of building it in the first place. 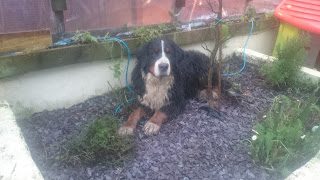 Here is a case in point, the weather is disgusting yet he chooses to sit in it rather than get indoors. 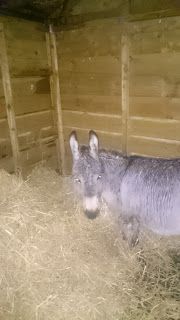 More jobs ticked off, clear out all the offerings from all of the animals, bed them down with new money straw, move old furniture out of cottage and take two massive trailer loads of rubbish to the recycle centre. I all a busy first day of the weekend 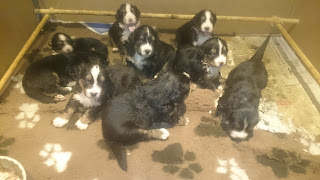 especially as mixed in with this was dog watching and child care. 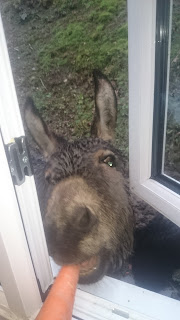 Sunday the weather was worse, so I lazily fed the donkies from the kitchen. 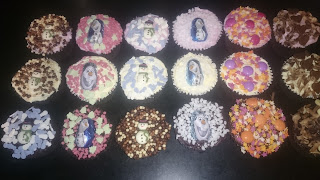 As Im on a diet a good job was to make cup cakes for the local Christmas Fayre which, once was over 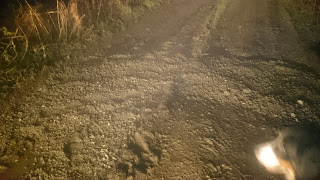 left precious little time for road repairs, this was done in the dark eventually with compulsory K9 supervision. 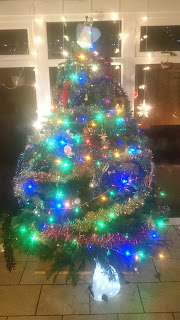 Once all the outside work had been completed (read as much as can be done before falling over) it was time to get on with the most important job of the weekend. To the accompaniment of squealing children, barking dogs, mulled wine, mince pies and Greg Lake Christmas has landed at Rock HQ.
Posted by Tony at 13:48

maybe talk to Mother Nature to send some rain over to California.... we sure could use a whole lot, she could just let it rip....