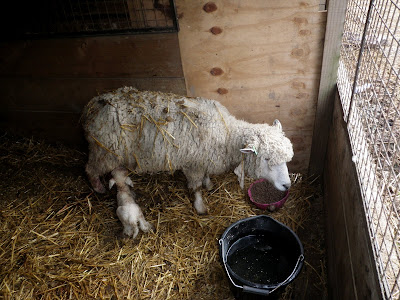 The reason why Springtime, not Easter, was so gigantically massive became very apparent this morning when I did the rounds. My initial feeling of joy was followed by an immediate sinking feeling as Springtime ran along the runway to get breakfast followed by a solitary lamb. Given her size she had to have had twins, where was the second. Having fed and fought off the rest of the greedy flockers I spotted a crumpled blob of white motionless on the hard concrete floor. Not good, the lamb was freezing cold (we had a frost) but the last vestiges of life were refusing to leave so I stuffed it into my jacket and was about to fetch help from my beautiful and oh so patient wife who was feeding and watering the infant when I saw another lamb lying on the straw in the shelter. This lamb was massive, dead massive, the birth sac had not cleared its nose and it suffocated, not far away was another not quite so big but equally dead lamb, this one with no sign of cause of death, just lifeless. Panic set in, were there two ewes that had given birth? A quick check of the lined up backsides (the fronts were hoovering up breakfast)revealed that only one had given birth and she had had all four. This is unusual, especially in a breed that almost always has one large lamb, rarely has two, but four! 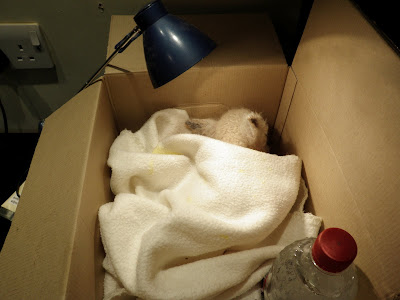 The lamb in my jacket was now needing urgent attention, days gone by we would have stuck it straight in the rayburn but since its forced demise I stuck the lamb in a box on the cookers plate warmer with two hot water bottles and an angle poise lamp for good measure. While that was taking effect I milked Springtime to get the vital colostrum milk for the ailing lamb. 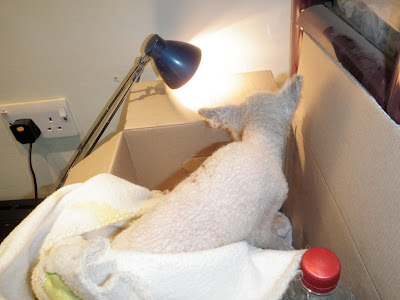 The one with mum was now feeding, good news. The one on the cooker was responding well to the heat and took 25ml of the milk. This was followed by several other small feeds and at this point it is snoozing in the kitchen under a heat lamp while the one with mum is warm and cosy in a deep straw bed. Hopefully both will be with us in the morning.

The journey to work was also eventful, and very productive. A ewe was on her back in one of the militias fields so I did the decent thing and tipped it the right way up. It was very grateful and no doubt will name one its lambs after me. Not too much further down the road I got over 30kg fresh of venison thanks to a driver who was obviously vegetarian and left the victim of their sudden meeting for me to pick up.
Posted by Tony at 23:10

Hooray for saving one! Amazing that she had 4!!

Fantastic score on the venison too, yum yum.