Blame it on the goat 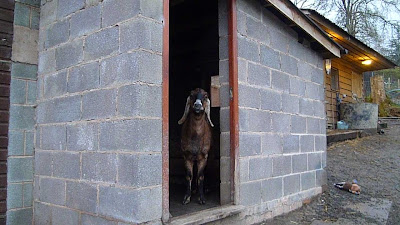 For some time yesterday I thought I had finally lost the plot. Signs supporting this theory were many, if subtle at the start, trying to put on a pair of glasses while I was already wearing some should have alerted me to the fact I was going to have one of those days.

Saturday night while walking the Berners something strange was happening in the lane, torches, figures crossing the fields, parked vehicles. In the wind and darkness they went about their business oblivious that I and eight carnivores were watching their every move. I say eight, there were seven Berners and a Technohermit, who, after observing the nocturnal goings on from atop his bone pile declared to the world in general, and me in particular that he was in fact a vegetarian. Doesn't eat much meat see. Me, having seen him destroy the best part of the Christmas Turkey was somewhat taken aback by this remark, especially as he was noisily devouring a Ginsters steak and kidney while musing on the comings and goings of our night time prowlers. I left him to his vegetarianism and scrubbed the idea of a full roast for his Sunday dinner.

Above the noise of the chainsaw I was alerted to their presence. In a scene reminiscent of Mad Max save for their gaudy technicolour outfits a gang of trail bikers and quads raced across the militias field approaching our smallholding. Now as no motor vehicles shall be allowed to use the Bonsai Mountain unless in pursuit of rogue sheep this was not a good sign, these did not look like farmers. Keen to prevent any repeat of quad bikes ripping up the pipework to the small scale fish farm I took my indignation down the lane to remonstrate with the miscreants. This might seem rash, fat forty something tackling hoodlum biker gang, but as I was holding a chainsaw I thought I would have the upper hand. As I crested the rise in the lane the expected horde had gone. Disappeared. Nothing to be seen. Vanished. Curious. I went back to my labours. 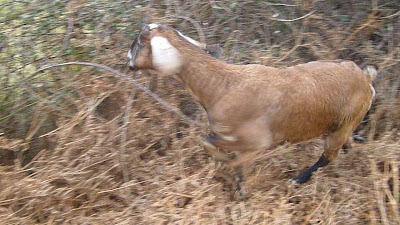 Perhaps the Technohermits declaration of not wanting to eat anything with a face, unless wrapped in pastry, planted the seed of the idea. Or Tracey, my beautiful and oh so patient wife's assertion that since being pregnant she was less inclined to eat meat, or that Rob and Beth were expected to dinner, more likely was that I had bought a job lot of veggies from the supermarket, whatever, I decided to cook vegetarian for Sunday dinner. I had all the ingredients for a butternut squash casserole. Except I didn't. I started to cook, but after much searching of the fridge, the pantry, both cars, the dog basket, the workshop, Tracey's handbag (most missing items are located within) no trace was found. After Rob and Beth arrived I still only had enough in the pan for one hungry Technohermit, the missing root vegetables could not be located anywhere. Tracey made helpful comments like, "but I distinctly remember you buying them" as my sense of madness heightened. Finally the goat got the blame, I changed menu, fed the Technohermit the precious veg casserole, who's response when opening the foil tray of "wheres the meat?" meant he was nearly wearing it, and all was well. But I still had a strange feeling like I was going slightly mad. The veggies were weighing heavily on my mind.

Ten thirty pm, last walk for Berners before bedtime. As they bounced around with excitement in the conservatory they knocked into my rucksack. The sloth of memory stirred. My rucksack. My large rucksack containing thirty pound in weight carried around the Bonsai Mountain as a training aid for the BBMC. Comprising mainly of root vegetables.

The missing bikers conumdrum also solved. My torch picked out bike tracks where they ripped up the gateway and up the slopes out of sight. They had been here, the gate still chained shut. The shiny surface of the hinges the far end showing how they had got in, lifted it clear and putting it back. The night time prowlers were obviously checking the route.

So you don't have to be mad to live here, but if you keep goats then you certainly are well on the way!