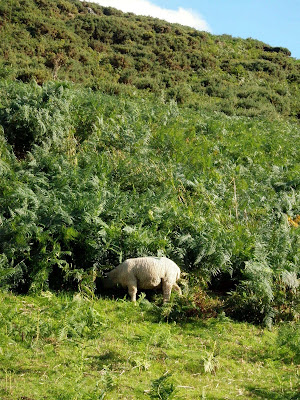 With ground cover as extensive as this around the perimeter of Rock HQ we are under siege from vermin. Foxes. Not the cutesey likkle wanimals that people mistake them for, but vicious cold hearted killers on the lookout for an easy meal. Given the numbers here perhaps its a surprise that any small animal prospers, not long ago a Vixen and five cubs ran across the lane, a lone fox was under the old oak watching us, another jumped into the garden one lunchtime and took one of the hens of the lawn. So bold are they that they feel quite safe hunting in the day light. We have curtailed our poultry's wandering, constructing Stallag 14, an impregnable fortress dedicated to keeping our egg layers alive, and close to the Rock HQ.
Losing one or three hens, ducks and geese a week has become the norm, but at least we have been spared the full on assault on the hen house and the carnage that entails. Until last night.
The gates of Stallag 14 had been left open to allow the hens and ducks to rake over the garden, sorting out the creepy crawlies and clearing weeds. By 9pm they were making their way back to their fortified bunker, the hens sitting on the perches, the ducks sitting anywhere but under a perch. I had shut the geese and the newly hatched ducklings away and thought about shutting the hens and ducks in but as a couple were still making their way back I left them to it. By half nine the sound of a few ducks on the patio was the first sign all was not well. This was misinterpreted by yours truly as ducks being naughty and staying up late so I carried on reading. Forty minutes later I was out with a torch to make the final check of the perimeter and shut the birds away. A clump of black feathers on the garden path an ominous sign. The torch illuminated the charnel house. Stacked in the corner were most of our hens, very dead, a brace of dead ducks led to three more headless hens killed in line as they ran for their lives. A dozen dead birds, and five missing ducks. A search of the perimeter was pointless but I did it anyway. Killer fox was long gone. In the yard I found two dazed survivors quacking in terror, and pressed against the beagles kennel I found a third seeking sanctuary. They were carefully rounded up and put in the stable for counselling. Down to two ducks missing.
First light and we were up, lay by the stable door was a fourth duck, a bit shaken and with a bitten wing but alive and quacking noisily to its friends.
Final score, nine dead hens, one dead cockerel, two dead ducks, one wounded, and three more traumatized. The final missing duck is presumed eaten. Next time anyone tries to tell me how lovely foxes are and that they should not be hunted, I shall just show them the photos of the inside of the hen house.