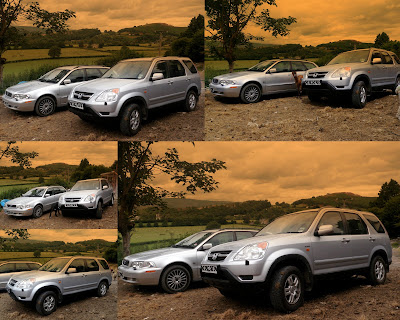 The switchover to gas has been completed. The yard at Rock HQ looked like a photo shoot for a car magazine today as we took delivery of a Honda silver dream machine that will replace Rene as the smallholdings 4x4. Geisha gave it the once over, Auntie Montana and Woozah crawled underneath it while I checked out the important bits like how loud was the stereo. The Honda has already been pressed into service, fetching a load of mixed feeds from Countrywide. On the way back The Oracle had a quick look around the CR-V, he has had one for a few years and sings its praises, so was interested in seeing a bi-fuel model. We even saw a Police version on our travels back and forth today. We are still pondering the pros and cons of life here without our ubiquitous Rene, the oft abused Rx4. Meanwhile he is lurking at the end of the smallholding by Trixie and ignoring all attempts to cheer him up by promising him a nice new home with tarmacked roads, no goats to stand on him, no huge loads of animal feed to lug around and a car wash close by.