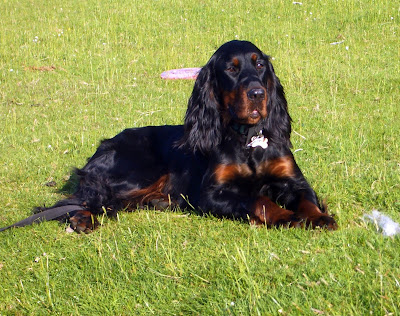 Faith was never one to conform, and was never a dog to slow down so its comforting to know that for her the end was remarkably swift and painless. Unlike the Gordon Setters of the books, she was a bitch that was bigger than the dogs, she would never sit quietly and await her masters return, rather she would bark her annoyance at being left out and was hopeless around guns. She had zero tolerance of smaller dogs, except for the ancient beagles, had two speeds, mach 10 and crashed out, a terrible thief, as in steal anything and always got caught and would always insist on drinking out of the toilet rather than her bowl. 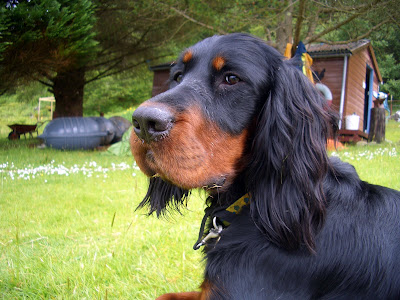 She looked stunning, in full flight would have beaten most greyhounds and her proudest moment was coming back to Rock HQ after an encounter with a fox that had breached the perimeter, she had part of its tail as a trophy. She had a sensitive side, she always knew when you were feeling under the weather and if you sang she would join in. Totally fearless on the mountain side she once followed Sara and I up a stupidly steep aspect of Tryfan in Snowdonia, Sara is convinced at one point Faith was using her teeth for extra grip. On the way home she fell asleep on top of Sara and drooled over her. Bless.
A short while ago we found Faith had cancer, the vet was amazed she was so active given how desperately ill she was. The good thing was was that she did not know about it, she just carried on, and we hoped she would see the autumn.
The last few days we noticed she chose not to run everywhere, but instead joined us at a steady trot. Monday evening she took a walk around the perimeter and gave us cuddles. We thought the end was close. Tuesday morning she seemed herself, trying to jump into the pig pen for extra rations, annoying Blackbirds in the hedgerow and generally making her presence felt. This morning she got out of bed, had a quick sniff of the summer morning, refused breakfast and curled up in her bed. Tracey sat with her and soon it was over, Faith had decided to go, she sighed her last goodbye, lifted her head and placed it on the back of Tracey's hand and went off in search of Paddy (another ex setter of ours ) to play forever.
She has been buried in a good spot overlooking the ranch on the slopes of the Bonsai Mountain at the base of The North Face Gully. Apollo was one of a number of the critters that came over to say goodbye.
She made me cry the first time I saw her, tears of joy as she was a Christmas present from Tracey. The last time I saw her was also with tears in my eyes. Faith was a joy to own and the sadness we feel now is a small price to pay for all the good times we had. A brave dog. 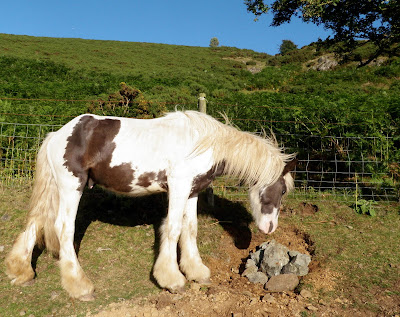