He knows you know! 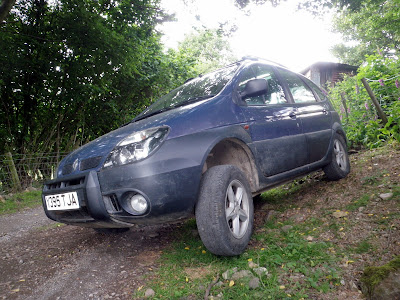 For a few weeks we have thought the unthinkable, we have spoken in whispers just in case, it was a difficult decision to make but Rene the wonderful Rx4 is going to be set free and we hope he finds happiness in a new home. We haven't actually told him outright, just in case he started sulking and refused to help on the ranch, but we know that he knows as he has started to misbehave. Seriously misbehave. In fact he tried to kill us. 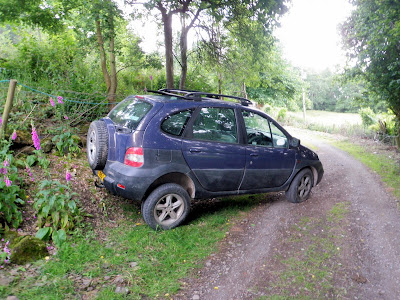 Today was pig feed day, a lovely bright and sunny day for a very big and necessary job, so Trixie was hitched to Rene and we set off on the short but eventful journey. As we approached the first major junction, where we have to give way to massive lorries doing light speeds I said calmly to my beautiful and oh so patient wife Tracey, something along the lines of "We've got no brakes" In my mind I uttered these few but necessary syllables in a manly fashion whilst tipping a wink to the figure clad in black robes clutching a scythe on the grassy verge who was watching our progress with interest. In reality I probably squeaked like a terrified rabbit but non the less I managed to communicate the deficit in stopping.
They say your whole life flashes in front of you at times like these, I have to differ. I was sat gripping the steering wheel pressing ever harder and more frantically on an increasingly ineffective brake pedal, my eyes focused on the green T of the Tarmac lorry and wondering what part of "We've no brakes" Tracey didn't quite understand as she replied "What do you mean no brakes?"
Time slowed, birds sang, the adrenaline surge aided my wizened left arm to apply an almighty pull on the handbrake, Trixie trailer dug her heels in, she didn't want to die either and somehow the lorry Rx4 interface was avoided.
Once my hearing returned to normal, all sounds drowned out by my beating heart, Tracey explained that she thought I meant no brakes as in I am used to driving Fifi with phenomenal brakes compared to the Rx4 with a trailer attached. We limped across the busy junction and I demonstrated the concept of no brakes in a lay by.
Oh, no brakes, as the rotation of the earth finally brought us to a standstill.
Yep. No brakes.
The Karma Police were with us and ensured we were not to far from a Steve we know who would have brake fluid. Steve the pilot duly obliged and when the right container was full under the bonnet of the naughty Rx4 I pressed the pedal again and the fluid shot out from the back passenger brake hose. It was bust. Steve rather obligingly walked in front of us waving a red flag to warn other road users of our presence and we managed to get Rene safely to hospital. Soon fixed I brought him home and told him off. He is currently sulking parked at a funny angle in the lane in an effort to show us how good his suspension is. 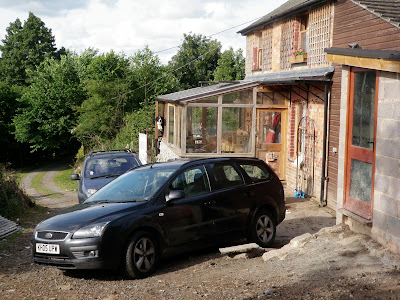 But its not only Rene who's days are numbered. Fifi is going too. She demonstrated her annoyance at being sold by throwing herself at a huge stone slab which defied the laws of physics by leaping into the air and scratching the door and wing. 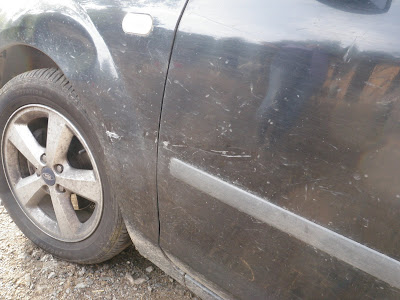 Tomorrow one of their replacements arrives, Vic, short for Victor, a Volvo, all shiny and clean. That will change. Very quickly.

Though I was looking for the cover of Marillion's single, I came across this story which turned out to be quite riveting. :)