No we're not going to do Stonehenge! 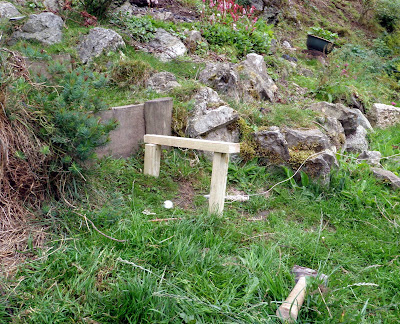 A groundbreaking day at Rock HQ. Literally.
It started with Pritch building a scale model of Stonehenge at the bottom of the cliff steps. He wondered why I was laughing so much, but then he's never seen Spinal Tap. So while I chuckled and kept repeating "I think the problem was that there was a Stonehenge monument on stage that was in danger of being crushed...by a dwarf!" he got on with setting up the space invader beacon. 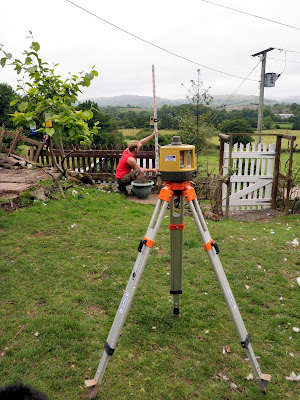 Once assembled this looked like it should shuffle across the garden getting quicker and quicker avoiding missiles, instead it fired lasers in a 360 arc, pretty impressive kit, not for contacting ET but for finding levels, and as we were building a patio and garden walls, level was a good place to find. 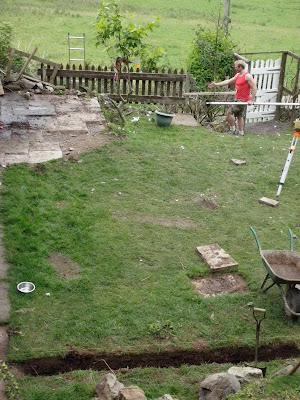 Several hours later we had got half the original patio up, it proved tougher than we thought, who ever built it had the idea that one day it would be the roof of a nuclear bunker, trenches dug for wall foundations, a new manhole cover that we never knew about hidden under a concrete slab, a pick axe through a pipe (luckily it didn't seem to be a pipe we used) and backache. Well I did, Pritch more used to manual labour found it all ever so easy. 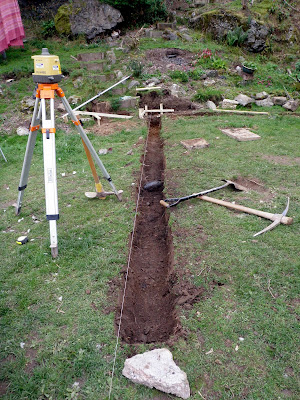 He didn't mind finding rocks the size of small planets lurking centimetres below the surface of the lawn which made digging a bit interesting. 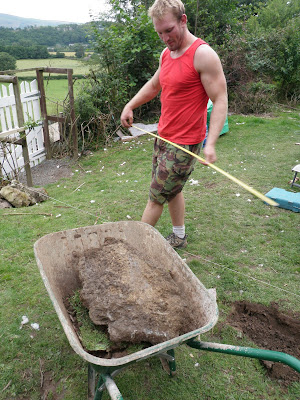 In all a good start and the planned grand opening of the new project at our garden party in six weeks time is bound to be achieved. I mean, what could possibly go wrong!