A quiet night in 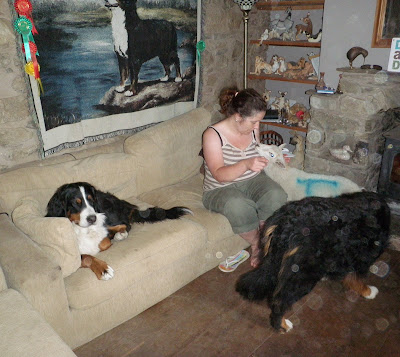 We seldom have nothing to do, so its not often we are found lounging around on the sofas, finding space on the sofas is always a task in itself with seven Bernese Mountain Dogs around the homestead, but last night the energy levels dropped around 8pm and I chose to lounge around rather than tackle the ever growing jobs list. Even simple tasks like proof read the new website were beyond me as I vegged out pretending to be interested in football as I was too lazy to get up and change the TV channel. The remote bought the farm a while back thanks to our newest addition. I was rudely brought back to reality by a high pitched baaaing from the front of the cottage. Sounded like Fern.
Fern the orphan lamb.
Fern the orphan lamb who should if memory served be a long way from the cottage.
Fern the lamb who should be with the two Ryeland lambs Trouble and Petal up on Willow Rise.
I opened the front door.
We faced each other.
About time she baaaaed.
And walked in.
Like she owns the place.
Straight to Tracey to say hello.
Then ejected the Berners as its her cottage now.
Settled down on sofa.
Watched end of footie.
Decided its a girls game and played with the wrong shaped ball.
Exit through front door.
Refused to go back to Willow Rise.
Let into garden where she pigged out on fresh grass.
Not a bad life. 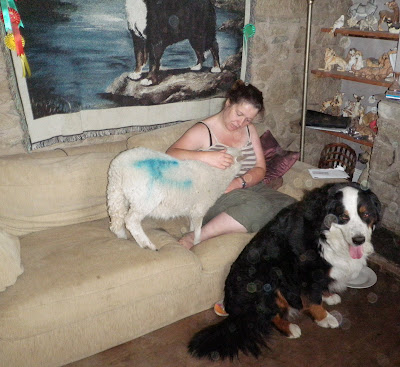