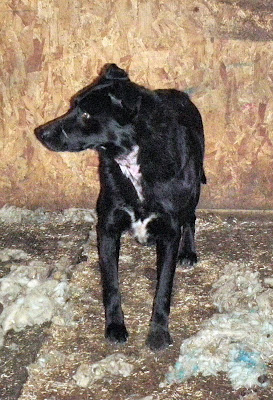 I have faith, I believe in Karma, and one day the Karma Police will catch up with those responsible for this poor dogs plight. It was like Yin and Yang, the cosmic balance needed restoring as yesterday an inordinate amount of time and resources were spent on what will be one of the most pampered pooches on the planet, Reuben. So today, as like yesterday which saw me travel across the country to collect him, today I travelled across counties to rescue this poor pooch. 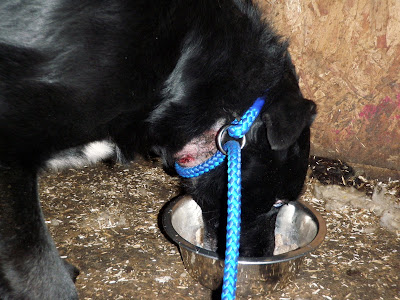 My job does, unfortunately, bring me into contact with the darker side of human nature. Those who cannot care for their children will not be able to care for any animal unfortunate enough to be part of their household. So this lovely Collie Labrador cross was unfortunate to be part of a dysfunctional family. The children abused by the adults of the home acted out their anger and frustrations on the poor lad, tied him to some railings and beat him with sticks until a passer by intervened. The sorry animal was carried into a "shed", a makeshift construction worthy of third world shanty town design and shut him in the dark for his own good. For two weeks. Every now and then the rescuer would remember to feed him, give him water and did, he claimed, phone the RSPCA for help. Thankfully the "rescuer" was on my patch, and gratefully gave the dog to me for some TLC and re homing. 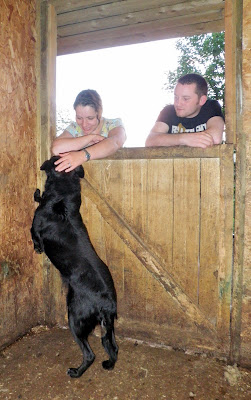 He is in reasonable shape, considering his ordeal, his back legs are small, lacking muscle from being shut in. As I picked him up to put him in the car there was a terrible smell, and blood, something was really not right. The poor pup had been put in a collar a long time ago and had grown, the collar didn't grow with him but instead of choking him became part of him, the buckle scabbed and furred over as his body was trying to heal over the wound. He came to Rock HQ via the vets where the collar was cut off, good taste prevents the description of the leather flesh fur combination around the metal work, the smell made us heave, he was shaved, cleaned, given antibiotics, a wormer and flea treatment. As we had no idea of his temperament he was muzzled during this whole process. What did he do? He stood still, looked into my eyes most of the time, tried to lick my hand through the muzzle and, unbelievably, wagged his tail. This poor dog, a victim of such abuse, was willing to place his trust in three unknown adults to make things right. He's now in the stable on the cosiest bed ever, 12 sheep fleeces. A light supper of softened biscuits, dog meal and goats milk was gratefully received and we have left him to sleep if off with a toy tiger and a ball that he happily chased around. Boris, as he is now known, will make someone a wonderful dog, and he deserves some wonderful people to take him on. 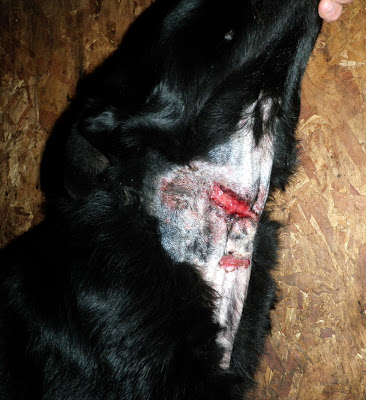