Messing about in the water 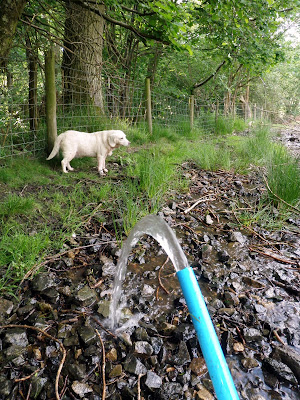 I said I was calculating flow rates, checking year long water supply, optimal routes for pipework and making sure the water pressure was constant. Tracey said I was building dams, making mud pies and annoying the dogs with jets of water. Either way the stable and garden water tank now has a constant supply, the overflow running to the garden pond, several taps along the 150 metre length will help with bucket filling. There was one sense of humour failure when the pipe laid was eighteen inches short to attach to the main supply pipe from the stream, soon solved but one of those arrrgghhh typical moments. The water pipe from the bore hole pump to the horse up the slopes of the Bonsai Mountain will now make filling their drinking trough a simple one person job with just a tap turned on, another off and switch thrown and two minutes later several days supply awaits them. The taps and switch are still thirty metres apart and top and bottom of a nasty slope but its better than carrying buckets. After several observations we now know that the water in the tanks will change completely twice every 24 hours and as the sink hole is placed in the main flow of the stream its almost certain never to run dry. When and if it does a backup system from the well will be rigged up, as will a recycle option.
All that remains is to level the base area for the fish tanks, link them up and plug them in. Simple.