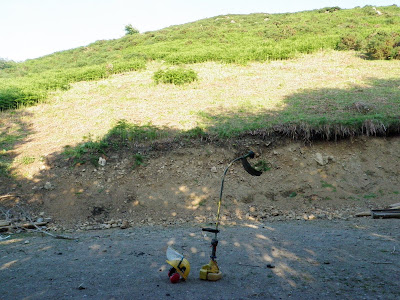 My beautiful and oh so patient wife Tracey told me to take it easy today, it being a very hot day and me wanting to take on the ever increasing green menace with the mk2 strimmer. Now the strimmer is old, and excellent for strimming the usual garden. Taking on acres of bracken its a bit out of its depth. The poor thing dreams of gently trimming the edges of lawns, getting up close to larch lap fencing would be a joy for it, and levelling the soft green grass under rose bushes would have it in raptures. Here its pitted in a life or death struggle with brambles, rock, vertical slopes, thistles, foxgloves, nettles, gorse bushes and an endless supply of Bracken. Each year it threatens to quit, each year its gently persuaded to comply with promises of lush pastures to frolic in if only the Bracken could be eliminated.
This week it seemed it would finally give up. I was at the far end of the Cauldron, surrounded on all sides by six foot high stems, we were desperately seeking a way back to the path, the strimmer creating a vortex of green slushy bits around me when it spluttered and stalled. Before the plants could rally and launch a counter attack I started the stricken strimmer again but in doing so the pull cord broke off. I nursed the machine back to the cottage knowing that this time if it stopped that was it.
A few days passed.
I looked at new strimmers.
The money tree shrivelled at the thought, and anyway its only a broken string so its a fixer upper. To its dismay I took it apart. I dropped most of its bits on the floor. The finely machined smooth bored bits like the carburettor I dropped carefully in the sand. My expert toolkit of a broken pair of scissors and a drill managed to get right into the heart of the machine. I found the broken string and re routed it. I put it back together. I took it apart again and this time wound the string up tight before I put it back together.
I pulled the short string, it refused to start. Now this strimmer has had major surgery before and the switches and accelerator don't work, it is in fact a motor on a pole held together with yellow gaffa tape. The electrics melted last year but a quick fix with lawn mower cable and sticky tape sorted that one.
Not starting was a problem. I left it overnight and hoped the fixit fairies would put the large spring back I found on the floor, perhaps it was a vital bit, who knows?
First thing in the morning I pulled the string. It started. Great!
Helmet and armour on off I go to do battle, yes I will take it easy.
Now as I cleared acre after acre a slight defect arose.
Anyone ever played those drinking games where you get an electric shock?
For some reason the strimmer went live, and as I was sweating and my hand became wet the jolting from the 12volts in the handle at first was a tad annoying, them became a trifle painful, eventually becoming a man test. I was not going to be beaten. So I carried on, fighting the live strimmer and the green stuff.
The picture above illustrates two things.
Firstly that the tide is turning, the Bracken is being beaten back from the perimeter.
The second is that it marks the spot where I was launched skywards in the style of a Harrier jump jet, not by an electric shock, no, much worse than that. After hours of toiling up and down the bonsai mountain fighting plant and machine I eventually got back on the track and was heading home for a cold one.
I had earned it.
Massively so.
I was almost delirious, lost in my own world of electric shocks, broken leaves and a howling two stroke.
So lost was I that I failed to hear Stable Sprite sneak up on me in his gleaming white chariot, getting close enough to touch me. To alert me of his presence he activated the air horn. Luckily for me the strimmer's power output was sufficient to bump start my stopped heart and how we laughed when I landed. Still, I cannot complain, he magically lifted the oak and granite kitchen unit out of Rene for us, he likes to help. 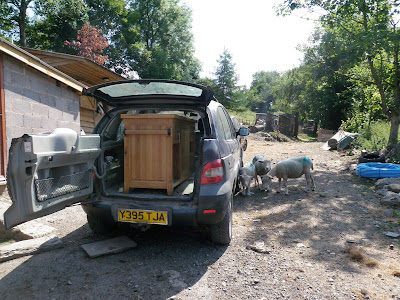 A special thank you goes to our friends down under, see the link on the margin and go and visit their smallholding in Adelaide. Simon and Kathy spent far too much of their very precious time repairing the TFTR site, so if it looks better than it did before its down to them being the fixit fairies. Many thanks you two.
Posted by Tony at 21:43