The colour of success 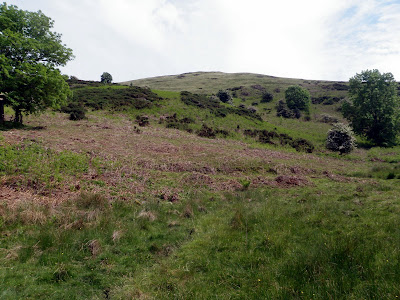 Brown, that's the colour of success. To the uninitiated this landscape may appear ordinary, nothing particularly special about it. It does, however represent hours of work, which is why its brown in places, not green. The bright green takes over, its the colour of the dreaded bracken, poisonous, fast growing and totally dominant on the Bonsai Mountain. Along with its major Allie the Gorse Bush its has taken over the landscape since the decline of grazing animals, like sheep. We tried to curb its progress by introducing a conservation grazing programme with goats, but they thought the contents of our vegetable garden was a much better option so point blank refused to take part in any weed eradication. I did try to gather the hooks, or the baby fronds as they appeared to feed the pigs but they looked at me like I was mental and chose to eat the plastic bucket, this meant only one thing. Yours truly armed with a mk2 strimmer spends a few hours each week cutting back the green menace. If the petrol strimmer is out of action or negative fuel or I just don't fancy getting coated in the green slime thrown up as it cuts down the fronds (Bracken is related to Triffids, the slime from the stem always hits you in the eye, even when wearing goggles and face mask it finds a way in) I sometimes resort to the mk1 strimmer, or great big stick and stalk the hillside in a seemingly erratic manner sweeping it back and forth cutting the weed down to size. What you cant see beneath the brown is the lovely green grass pushing through. And replacement bracken fronds. The war continues.