Gladiators! To the arena! 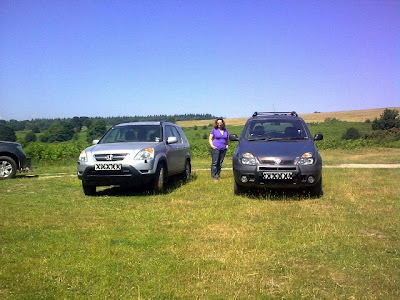 I was teasing Stable Sprite the other day over his inability to turn his old boar into sausage. He has already replaced him and sent his old boar on "holiday". His new prize pedigree piggies scoff caviar and truffles coated in chocolate, they bathe in milk while his old, dependable but ultimately replaceable porker is languishing in some forgotten field that is forever England. Perhaps never to return if the "holiday camp" guards can be persuaded to keep him.
So there I was having a go at Stable Sprites softness when he hit the my Achilles heel, Rene, our beloved Rx4 who has at least 101 uses and has been an intrinsic part of Rock HQ projects since I came off drugs and started driving again. The drugs were prescribed to alleviate the soreness of a nearly amputated left arm, but that's another story, see archive, anyway Stable Sprite pointed out I could hardly have a go for him not wanting to bar b que his old porker when I have feelings for the Renault.
Since we had Rene he has been used as a pig transporter, cat house, goat house, goat transport, feed lorry, waste skip, gate straightener, ambulance, off road taxi, meals on wheels, bale carrier, people carrier, furniture lorry, water bowser, chicken shack, snowplough, tow truck, gate and festival vantage point to name a few. He has carried out this multitude of tasks without comment or complaint. Ok his exhaust has fell off three times and the water pump gave out but he has been oft abused and much put upon and 99.99% of the time he has delivered the goods. So to even contemplate getting rid of him seems like betrayal of a close friend.
Hushed conversations have taken place here at Rock HQ just in case he was listening, but today he met his Nemesis, a Honda CRV.
The ride in the Honda was like comparing a jet fighter to the dodgems, it was unbelievably quiet, quick, did not induce sea sickness in corners and the air conditioning worked. It also runs on LPG which means 2x the miles for the same dollar as Rene, who if he tows anything needs to be followed by a private fuel tanker. The ground clearance is better, the body work is all in the right places and not threatening to fall off and it has a full service history whereas Rene's last service was back in ancient history. The wheel on the back doesn't impede the hitching and unhitching of the trailer, the back door window hinges up, just like Rene's ( a major selling point as far as Rene was concerned) all in all the yet to be named Honda beats Rene all the way to the fuel pump. Rene's only saving grace was that his seats all come out giving a huge space (currently maxed out with second hand furniture) and he has fog lights. But he's lovely and as we drove away from our Honda encounter we contemplated the future without our mental Rx4. Like Stable Sprite and his out of date boar, its the right thing to do to let it go, but a massive decision, life without our multifaceted Rx4 is almost unthinkable. LPG is the way forward for Rock HQ, but to do it we have to get rid of an old friend, and thats not going to be easy.