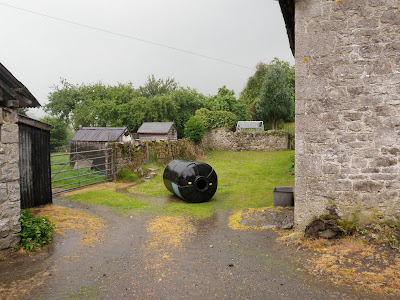 Work on the fish farm project continues at a frantic pace. Having scoured the classified ads and ebay for water tanks and finding that anything suitable was hundreds of miles away, or hundreds of pounds, usually both we were resigned to a huge delay while the money tree was tended more carefully.
The The Oracle came to the rescue with news that behind his barn was a 300 gallon tank, like the two we already had, and then when it came to paying for it he came up with a price that was so good it meant that there were funds left to buy the pipes and connectors. A quick trip into town and our local farm store where we checked out the supply of LPG, there was lots, so the plan to convert to LPG vehicles gathers pace. As I had saved so much buying the water tank, and was then totally surprised how cheap blue 25mm pipe was (I got 100metres for the anticipated cost of 25) I got carried away when confronted by an infinite selection of T connectors, joining bits, right angles and taps. Like a kid in a sweet shop I just kept picking more and more and in the end the cheap pipe at £44 suddenly rang through the til as a massive £167 plus vat with all the fiddly bits added on.
This stung the pocket and took us right back to square one with the whole budget spent. We now had the capacity and technical doings to move 1200 gallons of water but no cash for fish.
Until next month.
Still I had a massive project ahead and lots of endless enthusiasm to compensate for lack of ability. Rene as ever came to our aid and moved the tank from The Oracle's yard to our perch on the bonsai mountain. Rene's help at Rock HQ is making me feel really guilty as we are plotting his replacement, its like betrayal, I find it hard to look him in the headlights, poor lad.
Torrential rain then put stop to further work so I caught up on admin. Better check with the fisheries police that I am not breaking the laws, ominous warnings on the Internet about them coming round and interviewing the fish to see if you were looking after them. Lost in the world of fish protection I decide to phone them, well as its a rainy Friday afternoon they must have nothing better to do than talk to an idiot. A bored secretary type answered the phone and identified herself as a fish protection officer. " Can we talk about fish?"
"Yes," you could almost hear the stifled yawn, "What sort?"
"Trout" a long pause while she checked her nail varnish,
"Where are they?"
" No idea, but when I get some do I need a licence?"
"How many acres of water do you have?"
" Acres?" starting to feel inadequate, my 1200 gallons wont impress her.
" Yes, how big is the lake?"
"8 feet across, max" I stammered, audible sigh,
"A pond"
"Sort of"
"Will the public have access and will they be able to fish?"
"No.I just want to grow some fish on to eat"
" No you don't need a licence" she snorted. The phone went down as I heard the words time waster and straight jacket.
Sorted, no paperwork, no licence, no fees.
A curious email arrived.
Do you want fish eggs or fish?
Before a reply could be sent another arrived, cant get eggs but I can send fish, when do you want them?
ASAP was the only reply.
So, thanks to the generosity of Steve and Jo from the Isle of Man the fish farm is about to be stocked. And Steve doesn't even like fish! 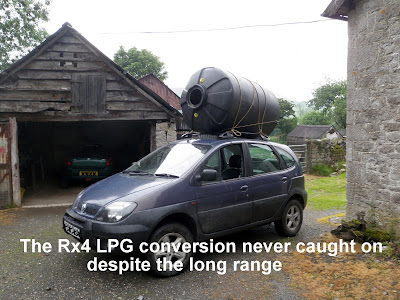