The day started so well, full of promise, a plan so cunning it would have given a bag of foxes a run for their money. The sun shone melting the overnight snow and ice from freezing rain and while I hitched up Trixie trailer to Rene I almost forgot the sleepless night caused by a leaking roof in our bedroom, ah the joys of living in a 250 year old house. This plan was going to save us money, time, and more importantly it was a plan that we could carry out using our own trailer.

The Stable Sprite introduced us to a nice member of the local militia who had over 40 bales of haylage, which a cross between hay and silage, for sale at a bargain price. So cheap was it that to turn down the chance of buying a bale would almost certainly result in being sectioned under the mental health act. So off we set to this lovely farm, the type that really does have roses growing around the front door, a cow called Daisy wearing a straw hat and a farm yard bigger than our smallholding that contained considerably less mud. We lowered the ramp at the back of Trixie while the huge green tractor carried the big black bale over. 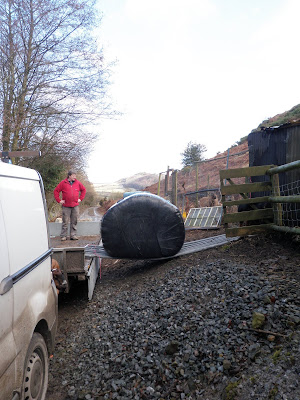 Unfortunately the bale was a bit wider than Trixie, and even when it was turned on its side so the flat bit was upright it still wouldn't fit. Once Stable Sprite got over his should have bought a bigger trailer routine followed by a mines bigger than yours competition he very helpfully agreed to borrow the militias trailer and bring the bale over to Rock HQ. OK, so the first part of the plan had failed miserably, but the rest it was bound to work. The bale would be rolled up the short bank to Hetty's pen and then put under the eaves of the chicken shack. There it would remain until she had recycled it into a different organic matter. It should last her a month and only cost us £10 in feed. Perfect. With Stable Sprite bringing a flat bed trailer the short slope could be reduced even further by using a massive metal 5 bar gate as a ramp, all we had to do was roll it along the gate, easy.
Except there was a flat side which made it hard to roll. And then there was the sheet ice on the trailer which made it impossible to get a good push. And then there was the gate which bent under the weight of the unrollable bale which made it very expensive. 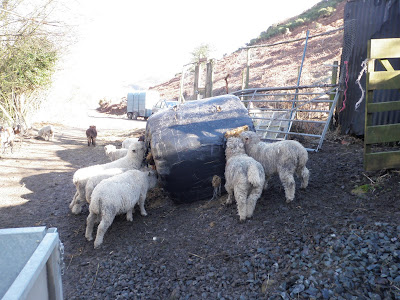 Despite Stable Sprites herculean efforts, pockets full of pixie dust and full vocabulary of swearing there was no way that bale was going uphill. Eventually we conceded defeat and managed to tip it off the gate. For a while all were held prisoner at Rock HQ by a recalcitrant bale of haylage blocking the lane but Stable Sprite remembered a few more obscure swearwords and we managed to push it far back enough to allow him to escape. The sheep then savaged the bale and hopefully taught it a lesson. 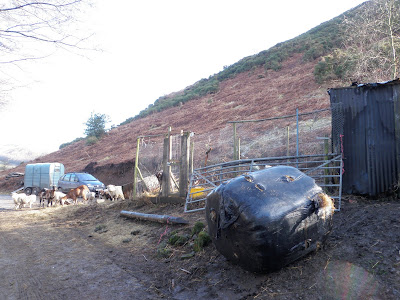 So there it waits, until tomorrow and round two.