Poke it and see 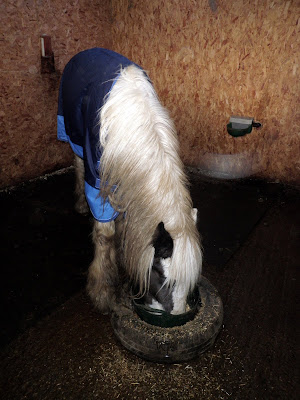 More snow today so the bale and I were saved from a close encounter which is more than could said for Steve the extreme Rayburn repairman. He has been here before, he is the SAS of Rayburn repairmen, brutally efficient, clinical in his execution of failed oil burning appliances.
The fact that I answered the door to him wearing the front half of a heavy horse harness, blinkers and so on did not faze him, he brushed aside my stammering explanation with a sooted hand, if S and M was my thing he was not to judge. It seemed a fruitless task to explain that our heavy horse harness had just arrived by courier and was deficit instruction manual so I was wearing bits and holding up other bits of brass buckled black strap work whilst Tracey adjusted lengths of complex leather work.
I kept quiet and made him a coffee while Tracey steered me round the kitchen. He unrolled his prayer mat and knelt before the stricken Rayburn. Now it is the heart of the cottage, it is our cooker, heats our water and when we can afford it it runs our central heating. The later part of its function has not been operational since January. 2009. As some of the furthest corners of the cottage are getting decidedly damp, and as luck would have it we had 500 litres of oil more than we anticipated we thought it a good idea to get the heating fixed and dry out the house.
We watched as Steve carefully dismantled the control panel. 3 inches of dust fell out.
"Ow ogen ave ee gok oo ave it erviced?" I asked through a mouthful of bridle.
"Every six months" came the terse reply, Steve was concentrating, which wire was it, the red or green? A mistake now and it would be all over.
Beads of sweat formed on his brow. "Have you got a stick?" he asked. I passed him the riding crop. He threw that away muttering something about perverts and pulled a thin allen key from his bulging utility belt. He poked the Rayburn. It burst into life. The radiators began to warm. The master had taught the Rayburn well, any further misdemeanor would result in a thrashing. Steve finished his coffee and patted me on the shoulder. "I'll leave you to err.... get on with whatever your getting on with then."He winked at Tracey who was adjusting my girth.
"Ank ooo" I replied. He rolled up his mat and made to leave, Tracey placated him with money and pork and finally convinced him that I was in fact normal and safe to be around and nothing strange was happening . He grinned, "Its ok, I see all sorts in my job. "
Probably not the best time then for the technohermit to step out of the shower room and ask for help finding his soap on a rope.
Posted by Tony at 19:29