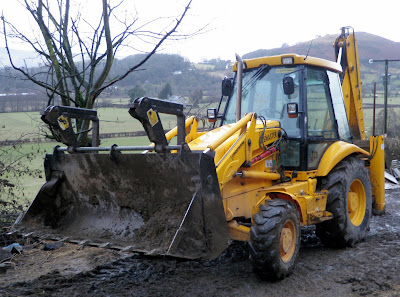 The arrival of this monster caused almost as much excitement as last nights run in with a fox. The dogs were going mental and Pathetic Triever, or Poppy was bustling about the garden barking at the moon, so nothing seemed out of place here but I decided that I should at least show some willingness to investigate what the commotion was in the garden. Armed with pink plastic pig torch I tip toed around while the Berners engaged in their favourite competition of who could drink the most pond water. Satisfied that no zombie horde was intent on attacking our home I left the garden, crossed the lane and stood above the bramble patch, which is when the ground suddenly exploded, the dogs, who are nothing if fearless in the face of danger, ran swiftly in the opposite direction to a fox who had been sat in the brambles sizing up the chances of a chicken dinner. 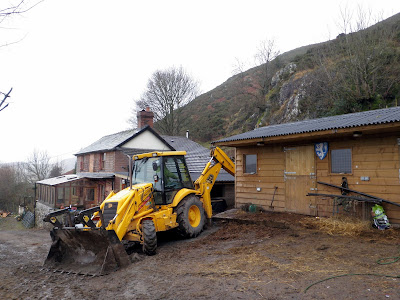 The best toy ever saw off a few jobs here today, a pile of pooh Tracey and I had spent all day piling up was moved to its final resting place in two massive scoopfuls, thus saving at least 40x wheelbarrow runs of 150 metres. The root of all evil if it was thinking of making a comeback was dealt the coup de gras by the giant yellow beast as it wrenched its twisted remains from the earth. A trench was dug, the wall lined with DPC, back filled with a ton of stone for drainage and a new path dug alongside the stable. 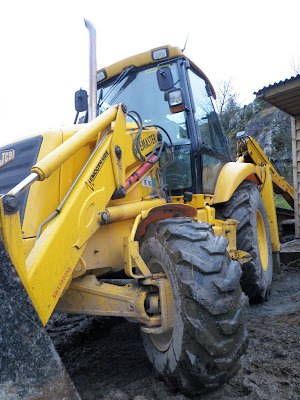 The landslide from the lane was moved and used to block the holes in the fence and the turning space all tidied up making reversing and turning trailers a joy rather than a tedious chore. I actually managed the 3 point turn in the space available but Stable Sprites grip on the steering wheel isn't what it used to be so its going to be a lot easier on him and our ears. 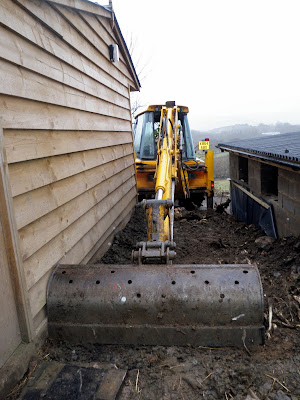 So by the end of the day I was convinced that a JCB gives you a nice edge when engaged in any sort of moving stuff. It even chopped some over hanging branches down, bit right through them like a big yellow prehistoric veggie gone mad. When it moved the gates, the one we will get round to using one day, the day we need to build an enclosure strong enough to keep Lions, these are the gates for the job, til then they are just a damned nuisance, to a new location, one that I wont keep jarring my shins on as they lie in wait, well I almost kissed the pilot of the machine. He did have a soft side, he spotted the worlds luckiest frog who fell out of the bucket causing a slight hold up in excavations until it was moved to safety, but I think he would have drawn the line at being kissed by me. No matter how happy I was. 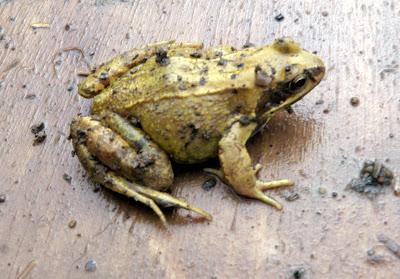