Wild night for a goose chase! 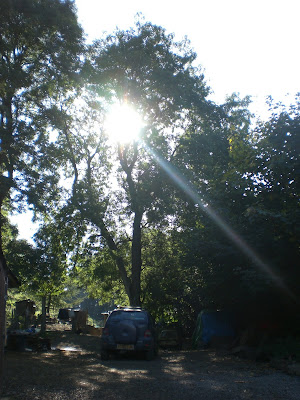 One of the many pleasures of keeping animals is that they are unpredictable.
Quite what has got into Brandy the big Brecon Buff goose the last two nights is any ones guess and while I like having him around he has nearly provoked his demise and slow roasting with potatoes and seasonal vegetables for running off into the darkness rather than walking serenely into his sleeping quarters.
Two nights ago he provoked a rebellion amongst the geese and led them up the hill to settle down for the night amongst the sheep. Rather than risk the fox taking them, and the wrath of Tracey for not finding them I dutifully trudged through the mud up the steep slope with a torch that cast as much light as a dieing match trying to sort through the assorted white shapes in an effort to find the misbehaving geese.
Finally they were persuaded back to the duck house whereupon Brandy sprinted down the lane in a last bid for freedom. Eventually he was apprehended and suitably chastised for his misdemeanours.
Now once was perhaps understandable, a nice night out under the stars instead of confinement in a stuffy shed but two nights in a row is almost unforgivable, especially as there was fresh clean bedding for them. Not feeling at my best last night after my attempt at running I have to admit to suffering a massive sense of humour failure as Brandy once again shot off as fast as his webbed feet could carry him instead of going to bed in the prescribed manner. I barely managed to catch the brute yet alone have the energy to carry him back up the lane to the duck house.
Slamming the door on my fingers in the darkness I gathered my sense of humour from the floor, brushed it down and after a few deep breaths in the howling gale that had started an hour or so earlier returned to the welcome glow of Rock HQ, fought off the five very attentive Berners and struggled up the stairs to bed.
Despite being very tired I didn't sleep very well, the wind battered the cottage and I lay fretting about the two Ash trees pictured above falling on the house, car or worse still on our horses. We are planning to cut them down but it would be just our luck for them to fall meantime.
Morning dawned and as we went about our rounds in the wind I cleared some branches from the lane that had fallen. Trees were missing leaves, the windfall apples were too many to carry and too many for the pigs to eat in one go. Buckets were blown around and the washing on the line had to be retrieved from the vegetable garden. It had been quite a night.
The Ash trees had survived.
One did look a bit different though.
A large crack has appeared in the one tree, Ash is a very brittle wood.
Felling them now is not a precaution its a necessity.
Posted by Tony at 20:54

Thanks for coming over to my blog to participate on the river-crossing style.

You've certainly got a thing with animals. I just read your posts. Funny!