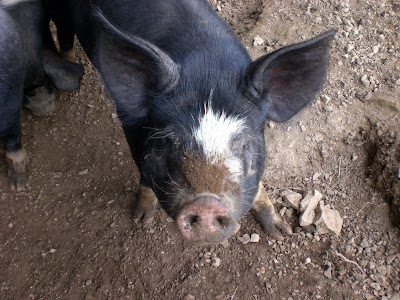 Two weeks ago the pigs were sent to piggy heaven and now occupy a big chest freezer in the workshop. One little piggie didn't go to the land of ice and snow but was put aside and cured as bacon. For two weeks now I have turned the meat every other day to make sure it cures properly and today was the day one of the collars was ready to try.

It looked perfect, and I carefully sliced it with my not quite as sharp as it should be knife and ended up with what vaguely resembled a dozen rashers on the plate. The colour was that of a nice parma ham, incidentally we do have a whole leg in a parma ham box which should be ready by Easter 2009, and it sizzled nicely in the pan. My mouth used to water when I watched the pigs playing in the pig pen, now as part of one fried to perfection I was positively drooling.

A taste sensation, a totally different bacon to the shop bought muck produced from pigs kept in worse conditions than battery hens that oozes white slime as it frys because its been injected by thousands of hypodermic needles pumping it full of water, curing agent and E numbers turning it into instant "bacon". This was delicious, the texture was amazing and the flavour an amazing combination of sweet and saltiness that now an hour on I can still savour on my tastebuds.

If Wordsworth had of tried our home cured Berkshire bacon perhaps the literary history of our island race would have taken a very different turn. He would have forgotten all about poncey daffodils and instead penned an ode to the bacon buttie.