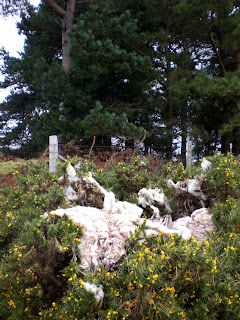 Quite a day.
Yesterday was a gloriously sunny day, today it blew a gale and rain lashed down endlessly, so all in all a very good day for a walk.


We set off from Pandy and it headed towards Hay-on-Wye along the Offas Dyke path.


Just as I was telling Richard and Jim that we were going to cross the path where American Werewolf in London began, and that we would probably see bits of werewolf nailed to pub doors in this are we found this grisly sight welcoming us as we began our 28Km route across the Black Mountains.


It rained non stop, everything got wet, you couldn't hear conversation as the noise from the rain beating on your hood drowned it out, but we were happy.


Even crossing the really desolate lunar landscape we remained cheerful. Right up to the point where we joined the road where the main characters of the AWiL jumped form the sheep lorry and began their epic and doomed trek to The Slaughtered Lamb.


Jim known for his wit had a sense of humour failure following a cheap bar of chocolate, now named the bar of doom. These are similar to the coins of doom, chocolate flavoured money he ate on our walk in February, see MTB girls blog for that one. He is now banned from cheap chocolate. Anyway he harangued the world in general for cheap shoddy goods as his walking sticks failed to deploy properly and promptly collapsed when he put any weight on them. Thus instead of saving him 20% effort he had expended time an energy carrying them across the hills, and now when he needed them most they were useless.

Nothing was going to lift his mood. He fumed as he walked the final leg. Richard and I tried to distract him by pointing and laughing but it was to no avail.

It was then we saw him.

Approaching through the mist, heading straight for us in all his beardy goodness.

He drives a dark green Subaru.

He doesn't give lifts. 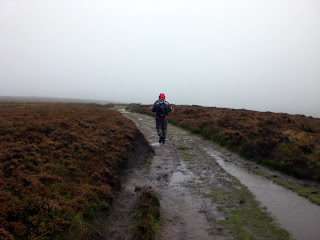 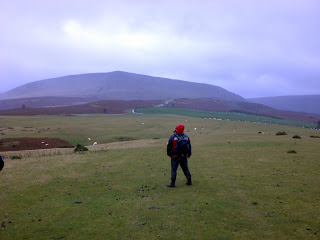