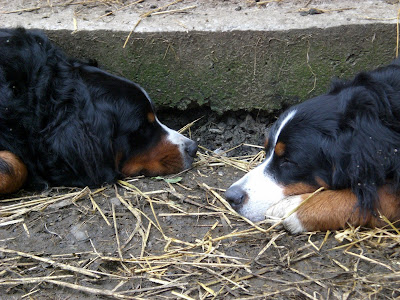 There are days when despite all the good things in life I just feel like slamming the door of Rock HQ and staying inside.

The day did get off to a good start, the morning rounds were completed with no real problems, save for the fact the pigs have finally worked out how to open the pig pen door and were waiting in the passageway for their breakfasts instead of by their trough. After I fought my way through several hundred pounds of pork they sampled the savoury delights of my boots and trousers and because I am not the most organised smallholder my right boot still has no lace so at one point I was doing a traditional one boot ceilidh, which is similar to Riverdance but quicker, with the ripest pig pooh in the county squishing between my toes. When I finally extracted my boot from the pig toilet I managed to coax the pigs back to their rightful spot and barricaded their door with bales.

Amongst the bales a Black Rock hen was sitting on some eggs, one of which had hatched. It might seem cruel but I took the chick off her, for two reasons, primarily she was perched on a stack of bales in the barn and without doubt the chick would have found the only gap in the hay stack, fallen through and would have made a tasty snack for one of the cats or pigs, more likely it would have got stuck and the prospect of moving a hundred bales to rescue a Kamikaze chick was not a pleasing one, secondly Olivia a chick in the conservatory hatched a week or so ago is lonely.

On return from work I set about the tasks of the evening with enthusiasm but this was soon knocked out of me by Geisha the goat who made it her mission to annoy me, trip me up, jump on me, knock buckets over or jump into buckets I was carrying at every opportunity. She got into the garden while I was watering the plants and despairing at the slug damage. Last night I killed over 150 large slugs, some were the size of small rats and squeaked when terminated. They are devouring everything, tomatoes, potatoes, onions and all things green. When I got her out of the garden she then climbed into Rene in a further bout of attention seeking behaviour, once evicted from there she caused a near riot in the kennels by claiming Faiths bed and Poppy's biscuits. Poppy was blissfully unaware of this theft as she had taken it upon herself to disappear creating another job for her owner and his failing sense of humour which really did fail when on opening a shed door a Muscovy duck that had been hiding did a fantastic vertical take off hitting me in the face..

Despite there being another half hour or so of daylight enough was enough and I sought refuge in Rock HQ.

Still I console myself that my day wasn't as frustrating as Ben's has been. He caught the train to Penzance as the first stage of his End to End cycle ride. Penzance station is 12 or so miles from Lands End and at half two I received a picture of a rain lashed Lands End on my phone, the trip was about to start. Except he couldn't, in cycling to Lands End his chain had broken and he was now waiting to get a bus back to Penzance to get it fixed. Not the best start to an epic adventure.

Still one day we will look back and laugh.