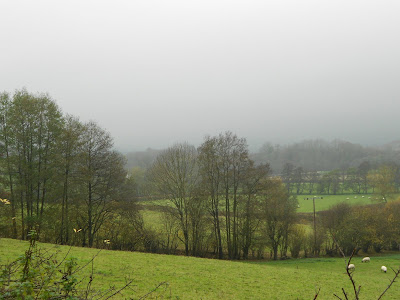 I thought yesterday was tough, getting one ton of pig feed out of Trixie and stored safely (The Ryelands were incapacitated by locking them in the stable, the piglets on the other hand... two bags knocked over in preference to the nice platefuls left for them..Bless their little trotters!) and then wrestling a super sized American food centre fridge that died a few weeks ago cooking the food rather than keeping it cool into the space created in Trixie before taking it to "The Freighter" in the co ops car park where helpful operatives watched yours truly hurt himself unloading useless gargantuan white good into their can be bothered to help range where they stuck it on a tail lift and launched it to planet Zanussi. All before 9am. 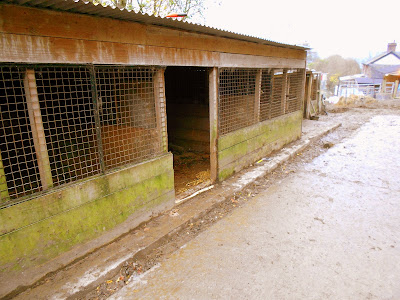 After a late full cooked I could be seen clearing the concrete runway of horse and cow debris before getting side tracked into the convert the kennel block into cowshed project. Several hours with a sledgehammer, hacksaw and power drill saw a reasonable sized opening created and a myriad of new oaths directed towards Karl, our helper from 2008 who disappeared in the Burmese jungle soon after constructing the kennels, and who's random use of four by four, six inch nails and total denial of the right angle meant that a simple cut an opening task became a figure out which bit I can cut without causing catastrophic structural failure and head injuries game.

All that meant no time to extend the runway. 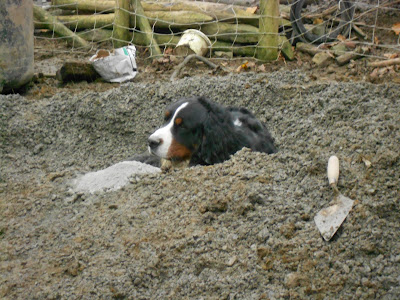 By midday today enough was enough and Battle lines were drawn and Spotty helpfully took up post in a convenient fox hole while yours truly worked around the furry lump and mixed 26 barrow loads before sunsetting stopped play. 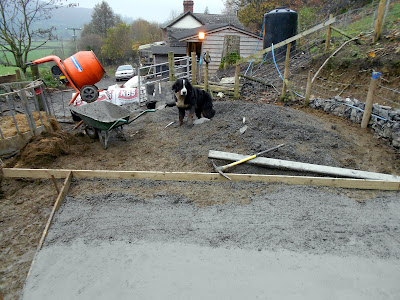 By then it was all I could do to carry the 15kg of carrots to the pigs where we played fetch the crunchy orange calorie. 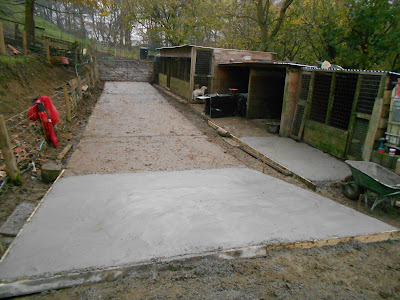 Next weekend should see us take the hard stuff out to the gateway . Its really starting to look like the plan to finish before Christmas will be achieved, and that's Christmas 2011!
Posted by Tony at 21:00

Is that a HMS Hermes style harrier launching ramp at the end of the runway?