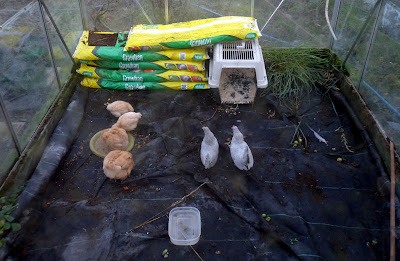 The tomato plants have been evicted from the greenhouse after failing to provide enough tomatoes for the time and effort expended on them. The beef tomato plants were a particular disappointment on two fronts, firstly they were not as big as expected and secondly they tasted like damp mouldy cardboard with the consistency of dead moths. The little cherry types were fantastic and those that survived the attentions of the hordes of snails lurking within the greenhouse rarely made it from the green house to salad bowl as they were like sweeties and scoffed as soon as picked. The empty greenhouse now has a second use as a temporary home for the small fowl above. The two Lilac Pekin Bantams survived the vermin cat chicken take away escapade and seem none the worse for wear. The two larger Buff Orpingtons are the chicks are the survivors of the small group we found in the hen house a while back while the smaller bantam versions were hatched from eggs found under a duck in the goose house and placed in the incubator. 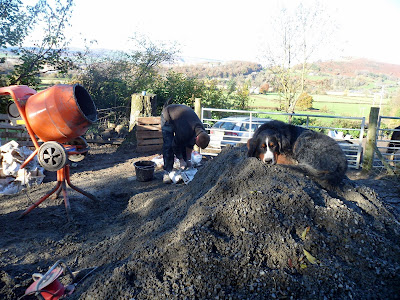 Rocky's fascination with hard work continues, he can watch it all day. Not quite so much time was spent fashioning the Rock HQ runway today but the arrival of number one son, he who cannot be named, meant that it was all done double quick time. Or it would have been had be not made me guess the top ten most catchy pop/rock songs in the history of the world ever honest it was a scientific survey. As my knowledge of music starts and ends with prog rock heavy metal with a brief foray into 80's synthesiser I was on a hiding to nothing and his miming such iconic anthems as whats that coming over the hill is it a monster (number one apparently, not in the top ten but a number one hit) meant more time devoted to pointing and laughing rather than buckling down and shovelling. 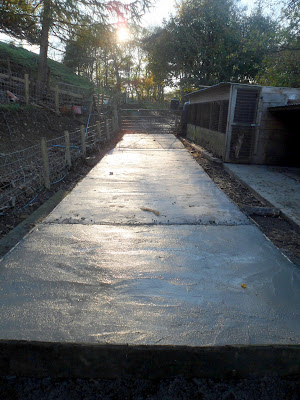 Still we got there, I guessed all ten tracks, the monster one definitely is a catchy one as just one chorus from he who cannot be named and its going round and round my head like a deranged claustrophobic goldfish.