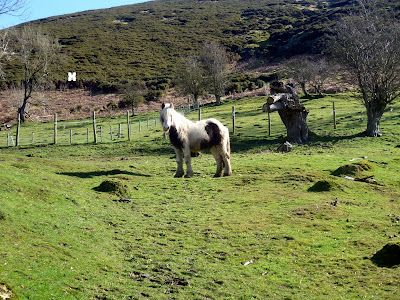 X marks the spot where the foxes have moved in. The boys have been turned out on Willow Rise to enjoy the sunshine and get out of my way while I wheelbarrowed beets to the pigs. The sheep were "persuaded" to vacate the sheep/pig/cow pen and have taken up residence in the stables while they lamb. I say persuaded, the usual trick of follow the bucket failed to entice them from the sheep/pig/cow pen. They stood staring fixedly at the bucket and point blank refused to walk through the open gate. 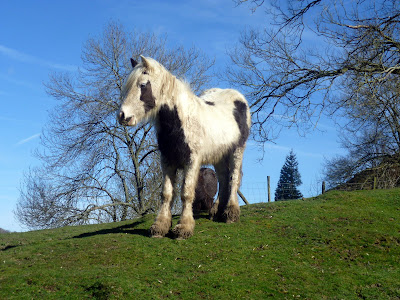 The only one that complied was Ferny Fern Fern from Ferntown, so I led her away up the track, the others all followed, but within the confines of the pen and into the barn where they bleated pitifully until they figured out that this was not the way to get a second breakfast and returned to staring at the open gate. This was repeated many times until a sense of humour failure led to the end of the Mr Nice Guy approach and the bucket was dumped in the lane where a small cow stuck her head in it and I chased and cursed the sheep through the gate. Finally they played their part and cooperated following the bucket covered in cow slobber all the way to the stable. Here they refuse to lamb at any convenient time but at least they are in a building close to the cottage and it has electric so when the next one decides to go into labour at 3am I am not fumbling around the interior of a sheeps backside trying to drag a reluctant set of future lamb chops into the world by the light of a failing torch. Sometimes groping around in the dark has real meaning here. 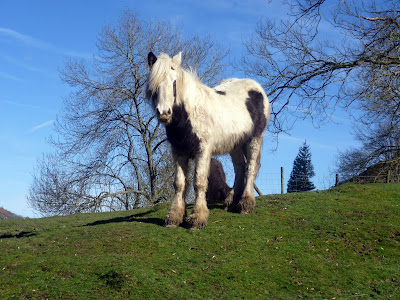 The chickens have been sorted out, the new large Buff Orpingtons have been moved to Stalag 14. They could not be relied on to follow the bucket so had to be carried. One was so surprised at her journey from A to B that halfway she laid an egg in my arms. The Bantam version of the Buffs have been given their own goose house to live in. The rest of the poultry are under review, some are dinners, some are pets, I have yet to be told which are which. I do know that we have far too many male Chinese geese but am unsure whether or not to attempt to eat one. I read an old recipe for them the other day, it involved boiling the meat for seven hours with some veg, seasoning and a house brick. After seven hours it advises that you drain the stock off, throw the meat away and eat the brick as it will be more tender and tastier. 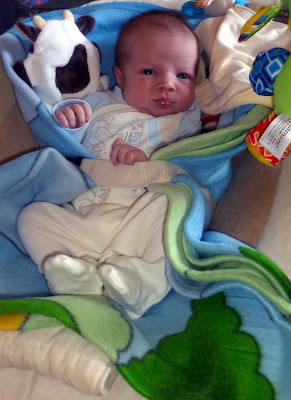 This young chap is now two weeks old and we love having him with us, life's good at Rock HQ and he is the first baby in the cottage for at least 45 years.

Cook the geese up, if they're that inedible you can feed the meat to the dogs and you'll at least have some stock to flavour other stuff with.
If it's partially edible, as in you can get it down but you wouldn't want a big slab of it, why not chop it up into little bits and use it in soups, stews or risottos using the stock for extra flavour. Bub's going to be easting before you know it and it's good to use stock to cook up the vegies in (unless you heavily seasoned it), just freeze it until you need it.