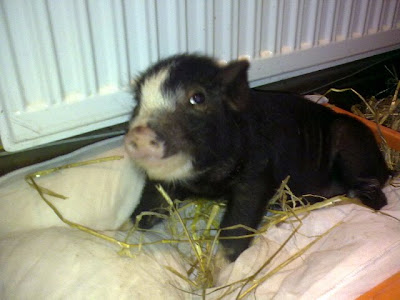 We went to see Stable Sprite and his clan today. Stable Sprite is the pig keepers equivalent of Imelda Marcos, to him pigs are like chocolates, you can never have enough, he is obsessed with all things trotter. He will seek to deny this but you merely have to point outside to the 55 or so snouts grubbing around his smallholding to prove him wrong. Whereas most pig keepers will have one boar, or access to one when needed, Stable Sprite has four of the beasts to keep his numerous sows smiling.
So today when we arrived it was no surprise to find him up to his welly tops in mud repairing a pig arc, his gremlin sidekick racing around on the quadbike on spurious errands from one end of the smallholding to another. Mrs Stable Sprite was sweeping her newly laid yard clean so their oldest son invited us in and after some persuasion offered us a hot beverage. Asked why he was not out in the fresh air with the rest of the clan he mumbled something about mud, weather, animal dung and girls. Seemed he was trying to get ready to go on what the yoof refer to as "the pull". Nice clean shirt, clean jeans, trainers and an aftershave that smelt of breadcrumbs. Apparently the Birds love it. My exclamation of surprise that he was not out helping the others on the farm drew snorts of derision, "Farm! We don't live on a farm!" That's when we saw this cute little bundle in the kitchen getting warm by the radiator. Don't live on a farm? Yeah right! 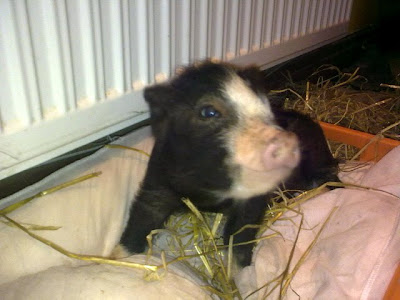