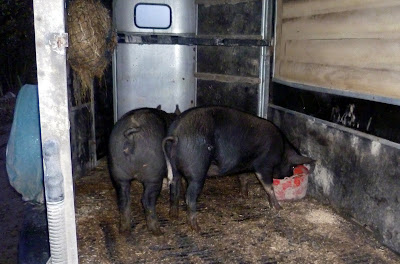 I didn't mind the fact that the Berkshires were demonstrating previously unseen sprinting ability at first light. Laverne and Shirley had an appointment to keep, the ride to the celestial sty was one they could not miss because today was all about timing. So as they pretended to be Usain Bolt I sauntered along the lane after them, supremely confident for I had the secret weapon. The feed bucket. After a 400 metre charge the piggies brain cells that were guiding this rebellious activity were overwhelmed by the neurons of greed and Scooby Doo like they both skidded to a halt in the lane, did the fastest 180 degree turn and galloped happily into the trailer, pausing only for a final photograph before the door was shut and their fate was sealed. By Friday thanks to our hard work and their total commitment Rock HQ will have more sausages than Walls.

What did cause a slight amount of consternation was Hetty's disregard for rule following. She, observing the lure of the bucket on the pigs decided that she would not be so easily persuaded back up to the stable to have her horns removed. No amount of provocative bucket tapping could win her round so we resorted to the use of goat again. As before she was lulled into a false sense of security by the presence of the horned beast and she skipped up the track and leapt through the stable door where she waited patiently for the veterinary.
Apollo had hardly any distance to travel to have his operation, but the distance he travelled was quite traumatic to watch. Vertical to horizontal in the blink of an eye. Thankfully we had the vets equivalent of the A Team, and Paul and Iris deftly removed both barriers to Apollos ability to sing Soprano. The collage shows some key points, if you click on the image it will get bigger so if you are squeamish avoid looking too closely! 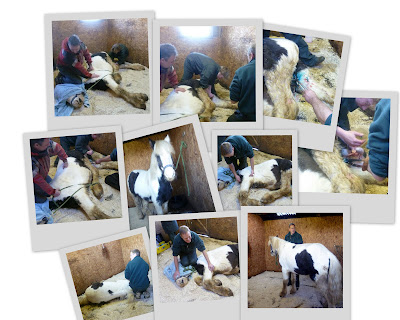 Apollo really did come round quickly and again thanks to the skills of the vets he managed to get up without maiming himself or breaking the stable. Right away he began eating his bedding, so we knew he was fine. Without so much a cup of tea the vets went into the next stall where Hetty was waiting. She looked for all the world like a Spanish Bull, horns flashing in the sunlight. But Paul managed to get a halter on her, and with the halter passed through a useful knothole in the door Hetty was tethered, unable to move and not needing a sedative. 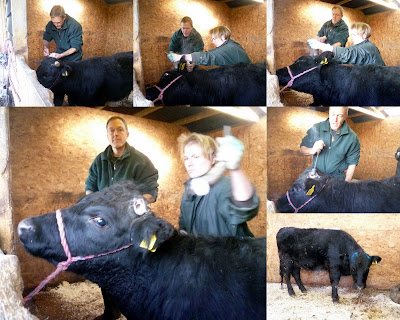 Forty five seconds later by use of a wire saw Paul had removed a horn, then sealed it with a hot iron. Hetty didn't feel a thing thanks to the anaesthetic and the whole procedure was over in around three minutes (remember click on the small image and it will grow) We now have a cow who looks less like she is about to kill you, the holes in her head will fill in with time, but for now we are getting used to seeing steam come out of the top of her head as the holes are linked to her sinuses, so presumably she could breath through these holes. We have kept her in in case it rains, an unfortunate drowning accident would not be funny.

So that was the morning sorted. Time prevents an account of the afternoon and our new arrivals. To be continued!