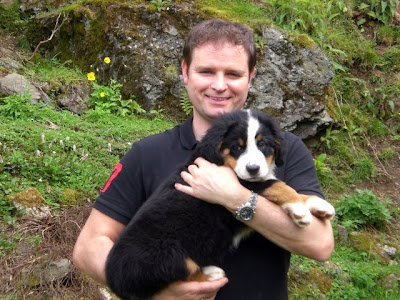 This is Flash and his new owner, also called Flash (strange but true!)

Flash aka Shane drove over from Dublin with his friend Greg to collect his new charge and from the looks of the posh motor they travelled in the future looks bright for this young pup. It has been a bit of an ordeal saying goodbye to these puppies but the fact that they all have such nice new owners has helped us say goodbye.

Human Flash is a bit of a TV star in Ireland, who knows maybe Flash dog might appear with him one day. Human Flash seems a decent sort and sponsored The Great To Do by buying 6 miles!

Don't forget you can follow the Dolyhir Berner Clan on the sperate website linked in the margin, or those of you on Firefox can follow http://dolyhir-bernesemountaindogs.blogspot.com/