A braver woman than I! 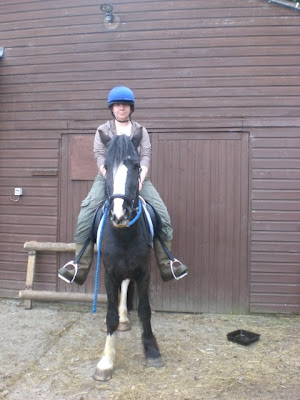 I have to admit to being a coward today and I bow down to the superior horseyship of my wife who taught the brute William who was boss (not me, I was the one who pulled the eject lever and baled out first sign of trouble) She is definatley herd leader.
William is now three years old and ready to be backed, which in the world of horse means sit on the beast and show him what life has in store for the next 20 years or so. Now I am to riding what MP's are to justifiable expense claims. I used to ride, but then again I used to climb 300 metre frozen waterfalls, it was a while ago. In my head it all seems so straightforward.
Tracey put the saddle onto William and climbed on, he didn't bat an eyelid. She rode him up and down the lane with me walking anxiously by their side ready to head him off at the pass should he start to muck about. It turned into a bit of an obstacle course for rural hacks, rabbits running out from the bushes, goats suddenly appearing from no where, a flock of noisy sheep the wade through, two Bernese Mountain Dogs enthusiastically chasing bunnies and so on, all failed to elicit any startle response from the trainee horse. He did for some inexplicable reason kick me in the knackers just before the half way point, the automatic punch on the nose response had to be withheld for fear of unseating his rider so muttering oaths and walking funny I followed them home.
We returned to the yard.
My turn.
I climbed aboard.
Its all a bit blurred at this point.
The yard is an extension of the concrete floor I fell on 18 months ago and caused myself a bit of bother (nearly lost it) so I was already wary.
Quite why William decided to do a Silver and Hi Ho away is beyond me but at one stage I swear I was able to see into our bedroom window as Williams hooves flailed the air whilst he reared up and gave it a mighty whinny.
We landed.
I somehow managed not to roll off his back, in fact I rode it out quite well and as Tracey confirmed my "That was a rear wasn't it" remark I ejected off the side adhering to the motto he who lives to fight another day lives.
Tracey on the other hand saw this behaviour as total bad manners (his not mine) and climbed straight back on him and rode him off down the lane whilst telling him in the loud horsey type way that if he had behaved himself he would be tucked up in his stable now instead of walking down the lane in the now falling rain.
Suitably chastised he performed properly and only then did he get to have his nuts in his nice clean stable.
Full of admiration for my wife I went onto the Internet to source some Kevlar armour for round 2.
Or perhaps I'll ride Trevor, its not so far to fall! 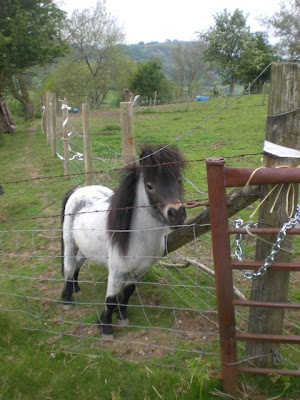