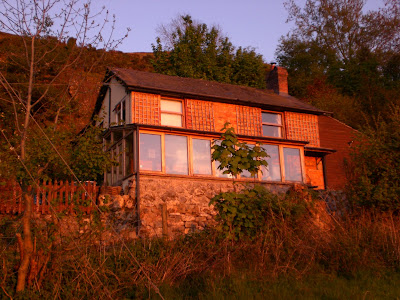 Tonight has been manic. The sheep have decided to stop eating grass and attack the fruit bushes and trees so they had to be moved. The goats took on Trevor in a battle over dinner, I will post a short clip in a while that shows the start of the fracas but I had to go and intervene before there were deaths. Nothing touches Trevor the Tyrants food! When the combatants were finally separated the now very nervous goats had to be tucked up in their beds a read a story to calm them down.
The pigs are going Wednesday and so I spent a while saying goodbye to them, scratching their backs and hand feeding them. Tomorrow night will be spent trying to coax them into the horse box supplied by The Stablesprite which will either go very well or create mayhem, I hope for the former rather than the later, just this once. While I was with the pigs we were treated to another spectacular sunset. Faith our setter managed to pause long enough for me to get one half decent picture of her and several blurred shots of various body parts as she ran out of shot.
One small victory was achieved where I got the two Muscovy ducks into their shed before dark. It has become a night time ritual herding the two ducks from the front of the stable through the gate, past the kennel and goat houses to the duck shed. Every night they camp out in front of the stable and every night they get moved. Sometimes they make it more fun for all concerned by running off in different directions and have even been known to fly off or run into the marsh of the Cauldron. This very endearing habit has led to them being threatened with orange sauce but as they are Tracey's they know they are pretty much invincible so I just grit my teeth and mutter oaths involving the word machete. So tonight when I got them to go to bed early it was a battle won. 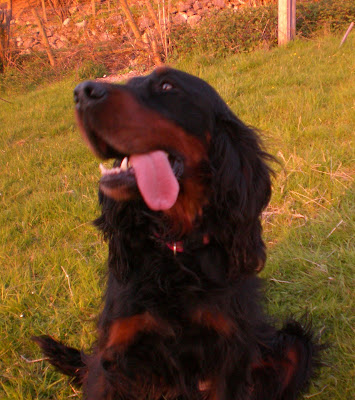