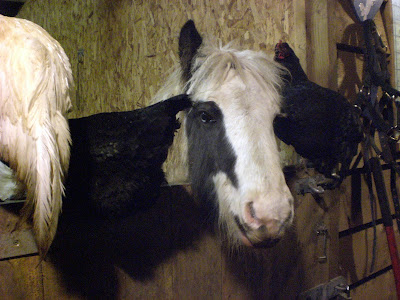 A busy day at Rock HQ and we have a new arrival called Bailey. Poor Trevor has been evicted from his stable as the easiest option when we got back from work was to put Bailey in the small stable until we can spend some quality time with him to see how he reacts with other animals, particularly cats. They did meet briefly and the explosion of cat fur and hisses did give some indication of the cats view of a large brindle greyhound visiting the smallholding. Apollo watched it all from his stall with his posse of hens and Budge his pet cockerel.

The Berners greeted Bailey as they greet everything, with the Berner Bounce. All parties signalled a state of truce by frantic tail wagging. Faith on the other hand careered around like a mad thing and if she could talk she would have been yelling "There's a new dog in there!" 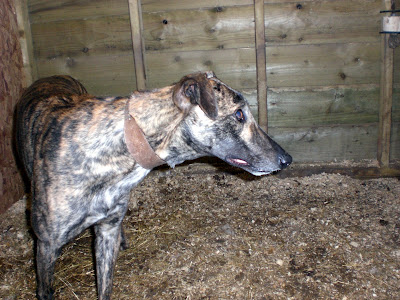 This went on for what seemed like ages until in a spectacular impression of Jack Nicholson from The Shining she threw herself at the stable door to get in. Had she got an axe she might have made a better job. Bailey remained calm and unimpressed by this display and after a quick inspection of the "kennel" settled down for a bit of a nap. Poor lad has been in the dog pound, today was judgement day, day 7, no home means they have to be destroyed. We are fostering him for Hereford and Worcester Animal Rescue until they find a new home for him. He is a lovely dog, obviously been well cared for but no one has come forward to claim him. He was just called greyhound until six this evening when Tracey christened him Bailey.

He has shown some signs of being very affectionate, trying to be a scarf to Tracey on the journey home. Apparently greyhounds are very placid and calm critters so hopefully some of that will rub off on Faith! 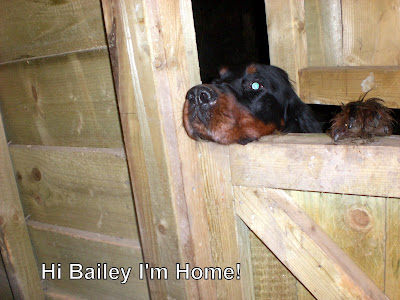