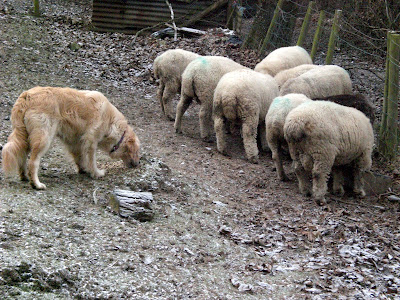 Its been bitterly cold again and even carrying 300 litres of water out to various beasts failed to raise the temperature sufficiently. Every beast was hungry, nothing worth foraging so they were totally reliant on the buckets of feed being distributed around. Poppy made sure the spilt sheep nuts were not wasted. After all the animals were fed and watered we set out to the animal rescue centre and donated some dog food. Luckily we were able to resist the sad eyed mutleys who all wanted homes, the rescue centre has been overwhelmed with abandoned dogs, a combination of the time of year and the credit crunch having an impact. We have however agreed to foster a three legged springer spaniel from next Saturday, its not clear how she lost her leg and the poor thing has been abused since being a puppy so we will give her some TLC until a new owner comes forward. Quite who would come forward to re home a disabled timid dog remains to be seen. We have some friends around for dinner next Saturday, if she turns on the charm offensive who knows what might happen. We once had a party at the same time a litter of kittens needed rehoming, by the end of the party all the kittens had gone to good homes with their very merry owners. 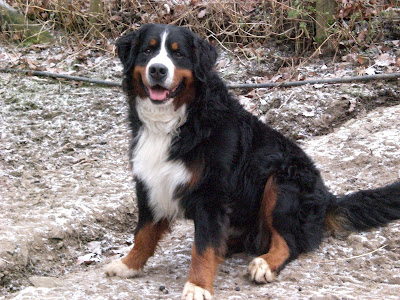 You see not all animals are as lucky as the handsome brute above. The cold has had a huge effect on the bird life, the bird feeders are having to be filled daily they are so busy. Cosmo, one of the Tabby cats has taken up vigil under the bird table but the birds seem to be able to stay just out of his reach. We also positioned the table so it is clear of any obstacles so if a bird does drop to the ground the cats have a long run up to catch it. But its not only the animals and birds suffering in the bitter weather. Mad Keith the techno hermit appeared at our door again asking if we would get him some coal from town. You could see he was cold and so we got him in the house and warmed him up with coffee and biscuits. While we were talking it dawned on us that he probably didn't have running water in this weather, his comes straight from a hole in the ground. As everywhere is frozen he is having to ladle it out of a gulley further down the hill. He stays warm by burning a paraffin heater advising us that you have to burn them so the flame stays blue, if it turns yellow its giving off poisonous fumes. This didn't sound good. 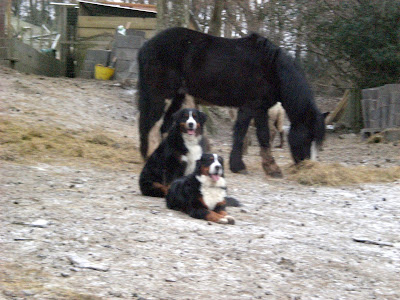 We dropped off his coal and as I put the sack in his shack I caught sight of his bed. How this 72 year old hermit managed to stay out in this weather is surprising and given the inadequacy of his bedding its a wonder he hasn't succumbed to hypothermia. As he is a funny sort to say the least, easily offended, I checked if he needed anything, like blankets, ah yes could do with them if we got some. Right no problem, how about shepherds pie would he like one of those, yes, ooh yes haven't had one of those in years. Ok Keith we will be back around 6 ish.
Cometh the hour cometh the shepherds pies piping hot in a thermal pouch, Rene managed the icy track back to Mad Keith's abode. Hot pies, two old blankets, a new double duvet and twenty litres of bottled water and our hermit neighbour was a very happy chappie.
One of the resolutions at Rock HQ is to keep a weather eye on our techno hermit neighbour, afterall its not just animals that have trouble looking after themselves.